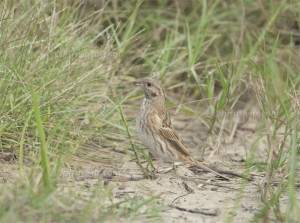 Though a Pine Bunting (Emberiza leucocephalos) is present in the Winsener Marsch near the Lower Elbe south of Hamburg for some days now, the Pine Bunting is a real exception in Germany. No wonder, that the bird keeps the twitcher in Germany in suspense.

Several times in the last days a bright Bunting could be noticed between about 400 Yellowhammers (Emberiza citrinella), 4 Corn Buntings (Emberiza calandra) and many Finches (Chaffinches (Fringilla coelebs), European Greenfinches (Chloris chloris) and Goldfinches (Carduelis carduelis) and Eurasian Tree Sparrows (Passer montanus). The white edges on the wing feathers were striking. However, all of the bunting were very mobile and mostly far away from the observers.

The Pine Bunting is widespread in Siberia as a breeding bird in the open pine forest west to the Urals, although its range only barely extends into Europe during the breeding season. After the breeding season, the Pine Bunting generally migrates further south through Asia. In the western Palearctic, however, there are also areas where it is found quite regularly, albeit as a localized wintering bird. The bird can be seen quite regularly in northern Israel in winter. It is END_OF_DOCUMENT_TOKEN_TO_BE_REPLACED 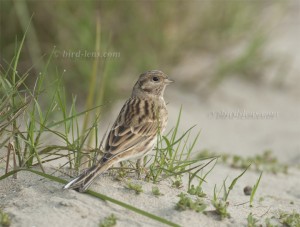