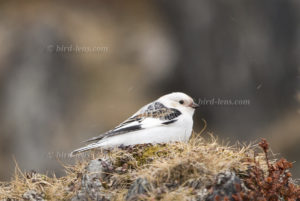 We’ve had some couple of Snow Buntings (Plectrophenax nivalis) on the coast around Westkapelle for the last month or two. The coast near Middelburg is in the province of Zeeland.

A small flock of five individuals at a spot just behind the dike and a single bird at a lighthouse. I decided to go and look at the individual bird, as I expected it would be photographed in a better light. I arrived and immediately saw 2 Corn Buntings (Emberiza calandra) fly by. The next thing that comes is really something good. It’s the promised Snow Bunting; a male very easy to spot perched on a bollard in nice late afternoon light. A little later it lands right next to me. But by the time I set up the camera and got it ready, a passing truck had apparently irrevocably chased the bird away. But I’ll listen to them again later. The sun quickly disappears behind dense fog. Then the male bird is back in the same place as when I arrived. A few photos and 15 minutes later the bunting flies high into the sky and disappears into the distance.