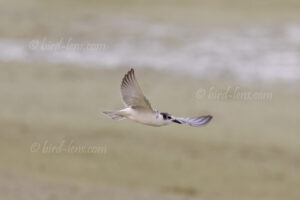 The view of the shallow bay is just great. We are en route to explore the lagoons and coastal habitats between Liman, Narimanabad and Baliqcilar in southern Azerbaijan. The huge bay of Kizil Agach (another spelling: Qizilagach or Ghizil-Agaj) is the largest wetland in Transcaucasia. It is easily accessible from the causeway between Liman and Nerimanabad. The entrance to what is shown as a national park on the maps can be found quickly thanks to Google maps. We have to stop as soon as we leave Liman. Chlidonias – Terns are patrolling the shore in flight. They cause me identification difficulties at first. But a little later it is clear: they are Whiskered Terns (Chlidonias hybrida). The first thing I noticed was a Tern preening on a rock in the shallow water. Behind are fishermen in flat-bottomed boats. Nice picture.

Unfortunately, the lagoon area is quite littered near the village. But right away we see a lot of Little Grebes (Tachybaptus ruficollis). There are really many. I count 62 individuals of the Little Grebe. Eventually I stop counting and we continue along the embankment. On second sight, I observe Great Crested Grebes (Podiceps cristatus) and at least one lonely (Grey-headed) Purple Swamphen (Porphyrio porphyrio). A few waders can also be seen in the shallow lagoon as well. Among them are a Northern Lapwing (Vanellus vanellus), 4 Ruff (Calidris pugnax), 7 Common Snipes (Gallinago gallinago) – which are quite common, even if they are inconspicuous on islets in the lake – , a Common Greenshank (Tringa nebularia), 22 Pygmy Cormorants (Phalacrocorax pygmaeus), 2 Great Cormorant (Phalacrocorax carbo), a Grey or Gray Heron (Ardea cinerea), 33 Little Egrets (Egretta garzetta) and at least 12 Cattle Egrets (Bubulcus ibis), which – as it should be – stand next to grazing cows in the shallow water. Eurasian Magpies (Pica pica) and Hooded Crows (Corvus cornix) can of course also be seen.

After we were stared at intensively by 2 cheeky-shy girls from the village, asked what we are doing and then also photographed with the mobile phone, I put the spotting scope back in the car and then we continue on the dam. There is water on the right and left. We park the car again at a bulge. There is also reed up to the park bulge. A small, high-contrast drawn bird has hidden itself there. It’s a Cetti’s Warbler (Cettia cetti) that I even can photograph.

Unlike further north in the dry savannah, not only the landscape is reminiscent of the marshes of Holland, but also the weather. Gray clouds, probably high fog-like clouds, predominate. Out on the lake some fishermen are still busy with their flat-bottomed boats. In between, above all, an unbelievable number of Nutrias (Myocastor coypus), which swim everywhere in the water like dark mounds of clay.

We’ll stop a few more times. A very good roadside birding spot is then the west end of Nerimanabad village.

Dalmatian pelicans (Pelecanus crispus) and many species of shorebirds, terns, gulls and ducks stop here in large numbers during migration to rest and feed. Furthermore the extensive coastal habitats are excellent for Terek Sandpiper (Xenus cinereus) and other shorebirds. Songbirds rest in the tamarix bushes along the beach. But there have also been vagrants like Greater Sand-Plover (Charadrius leschenaultii).

In winter it is said, that hunting pressure in the area is very high, although most of the wetland is a state nature reserve and should therefore be protected. Fortunately, we cannot report on such conditions. As in other areas, we did not hear a single shot. However, compared to Central Europe, it is striking how shy the ducks in particular are – and not just Common Teals (Anas crecca), but also Mallards (Anas platyrhynchos) and Northern Shovelers (Anas clypeata).