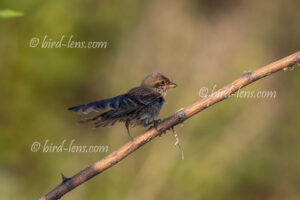 The roosting Red-backed Shrikes (Lanius collurio) are all juveniles. One has taken a long morning bath and is now shaking its wet feathers on a stick in the morning sun. Again and again the wings are spread, shaken and then placed one on top of the other. In particular, a tiny garden with runner beans in the middle of tall shrubs, plastic waste and construction waste in a shipyard area in the village of Çamburnu seems to be particularly attractive. A nice surprise is a Wryneck (Jynx torquilla). It can be seen briefly in an alder tree with another young Red-backed Shrike. Otherwise, it’s a good start with the migrating and resting birds in this rather ugly corner of the Black Sea coast. At least 1 male Blackcap (Sylvia atricapilla), 3 Hooded Crows (Corvus cornix), 2 Barn Swallows (Hirundo rustica) and 10 White Wagtails (Motacilla alba) can be seen. A Common Kingfisher (Alcedo atthis) has also made its territory in the harbor area and prefers one of the alder trees that have grown wild at the edge of the pier as a perch.

One or more shipyards are also located in the port area. I decide to walk along a very productive pier because it is well overgrown. Figs with lush fruits can be seen everywhere. The path along the mole behind the thick breakwaters allows me to observe the birds well.

After yesterday’s Greater Short-toed Lark (Calandrella brachydactyla longipennis) on the pebble beach near the town Of, a visit to a shipyard site is also very productive. While the Greater Short-toed Lark turns out to be quite shy but stays for a long time on the thick pebbles, the Red-backed Shrike are not easily disturbed and stay on their perches.

On the first days of a Black Sea holiday in Turkey, I want to devote myself to bird migration along the Black Sea coast. Here I expect migrating songbirds, especially in the unattractive and often littered ruderal areas of the immediate coastal area. Why shouldn’t these few remaining areas of the coast section, which is otherwise completely built up by traffic and settlement, not be at least as attractive for resting songbirds as Helgoland?

It is therefore worthwhile as a birder to visit the few natural places on the densely populated and densely built-up Turkish Black Sea coast. The Black Sea coast of Turkey is better known for the migration of birds of prey. But the songbird train is also worthwhile here in Eastern Anatolia.

To meet the growing demand for top-of-the-line images of the rarer Palaearctic species, Bird-lens.com strives to expand the range of images of Western Palaearctic birds. Trips to many locations to take pictures of rare western Palearctic birds have been very successful. This nice picture of the blog is just a first impression of what you can find in the gallery of the birds of Turkey or in the “Picture Shop” very soon. Please leave a message if bird-lens.com can provide a picture.