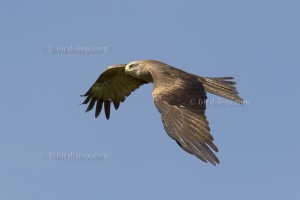 The wide meadows oft he Elbe south of Wittenberg in Saxony-Anhalt is a special bird protection area. By far not as populated as the lower Rhine valley, it favors many migrating and breeding bird species. Spring is spectacular. A familiar “neigh” is in the air. The meadows are mainly characterized by the distinctive calls of the Common Cranes (Grus grus) or the calls of the Taiga Bean-Geese (Anser fabalis) and Greater White-fronted Geese (Anser albifrons) high in the blue sky, but this gentle, melodious trill clearly indicates the Black Kite (Milvus migrans ). Hearing the Black Kite is one thing. But to find the Black Kite is not that easy. Then I discover a Black Kite high in a poplar tree on the edge of the wide floodplain. When I stop the car and get out, the bird flies away and shows very nicely the tail, which is not as notched compared to the Red Kite (Milvus milvus), which had already arrived on ist breeding ground the week before.

For many people, bird migration is synonymous with the masses of birds that move over us in a more or less orderly manner. But this form of bird migration is more the exception than the rule for us. Many species migrate secretly and quite quietly. Our warblers such as the Garden Warbler (Sylvia borin), the Blackcap (Sylvia atricapilla) or the Lesser Whitethroat (Sylvia curruca), the Common Chiffchaff (Phylloscopus collybita), the Willow Warbler (Phylloscopus trochilus) or the Reed warblers such as the Sedge Warbler (Acrocephalus schoenobaenus) migrate individually at night. During the day they rest mostly hidden in forests, bushes or reeds. Conspicuous accumulations can only be observed in exceptional cases. When they stop singing in summer and then make their way back to their winter quarters after the moult, there is hardly anything to be suspected of the migration. Only with special methods, such as catching with nets for the purpose of scientific bird ringing, ornithology can determine more precise knowledge of the sequence of migratory and resting events of such unspectacular birds. Aerial spectacles such as the crane migration in front of the blue sky are rather the exception. Most migratory birds that migrate during the day also migrate inconspicuously. Ornithologists carry out migration examinations to record them. To do this, ornithologists search the sky for hours from an exposed point and count all passing birds. On a good day, astonishing migration movements with tens of thousands of individuals can be documented in this way. One example is the observation described at bird-lens.com on the edge of the Eifel.

Since most native breeding birds also wander after the breeding season – the so-called dispersions – within the large area of ​​their winter quarters, it has been calculated that only about 5% of all species occurring in Germany do not undertake any large-scale migrations at all.

The Black Kites of the northern Palearctic are long-distance migrants. They overwinter south of the Sahara. Some move south to the Cape Province. Most, however, remain in West and Central Africa north of the equator. The migration distances of European birds rarely exceed 5,000 kilometers, but in individual cases can be more than 8,000 kilometers. Individual Black Kite already overwinter in south-west and south-east Europe as well as in Sicily. In the literature it is still said that the migration home begins at the beginning of February and the birds in the breeding area appear at the beginning of March at the earliest. As a rule, they would not even arrive on their homegrounds until the end of March or the beginning of April. Perhaps the warm rays of the sun after ice-cold weeks with snow layers attracted the Black Kites this February in particular.