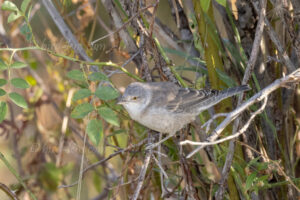 The planted pine grove is surprisingly productive. In the car, I patrol the edge of the forest, which is now in the morning sunlight. This draws out the resting migratory birds in masses. I patiently park my car a short distance from the pines and just wait. Several (5) Spotted Flycatchers (Muscicapa striata), a Willow Warbler (Phylloscopus trochilus) and a shy Garden Warbler (Sylvia borin) quickly arrive. A female Redstart (Phoenicurus phoenicurus) and at least one Olivaceous Warbler (Hippolais pallida) can also be seen and photographed. A Chiffchaff also comes down from the pine crown. The black legs are clearly visible. It looks really brown on the back now. So it should be the Mountain Chiffchaff or Caucasus Chiffchaff (Phylloscopus sindianus).

A bit further in the open, Swallows suddenly fly like mosquitoes in the early morning light over the hilltops of the gentle hills of Çildir Gölü. Sand Martins (Riparia riparia) buzz around the heights in search of food. Little gnats have emerged from the riparian waters around the hills and are now providing the much-desired snack on the way to wintering grounds in Africa. The masses of Sand Martins – including a few Barn Swallows (Hirundo rustica) in between – are overwhelming. I have the impression that the stream of Swallows that arrive, feed on the mosquitoes and then fly on does not end at all. There are still many, many mosquitoes around. After a good hour – the sun is already high in the sky – the show is largely over.

Now I can devote myself to the other birds on migration. The first Red-backed Shrike (Lanius collurio) does not need long to come. Another Sylvia-warbler can be heard behind me. A little later I see a Common Whitethroat (Sylvia communis), which probably is the „owner“ of the calls. An Ortolan Bunting (Emberiza hortulana) sits beautifully on a stalk in the early morning light. Another beeper has to be determined. That’s probably a Tree Pipit (Anthus trivialis). The Red-backed Shrikes are increasing in number. They now occupy practically every rosehip bush. After a while I can tear myself away.

I want to check a little more bushes. At a densely overgrown hedge I find the Thrush Nightingale (Luscinia luscinia) of my yesterday´s visit again. The bird is calling hard. Just like the day before, it doesn’t want to show itself. After a little coaxing, I let go of him, because in the meantime I have found a much more worthwhile target: a Barred Warbler (Sylvia nisoria) hatches in the thorny bush. I can photograph two individuals extensively. Then I also see a rattle warbler (Curruca or Sylvia curruca), which appears very bright to me. This could be althaea Lesser Whitethroat (Curruca curruca althaea), which occurs from southern Kazakhstan (the Karatau Mountains) in southern Turkmenistan and northeastern Iran to east of the Tien Shan. Finally, a young Whinchat (Saxicola rubetra) can be photographed very nicely on a boulder. A selection of the songbirds migrating at Cildir Lake in eastern Turkey can be seen in the relevant gallery “Cildir Lake 2022 Migratory Birds“.

At 1,959 m above sea level, Çildir Gölü in Ardahan province is one of the highest freshwater lakes in Turkey. It is also the largest lake in Eastern Anatolia after Lake Van. Surrounded by the mountains of Kisir Dagi and Akbaba Dagi, the lake covers an area of more than 120 km². The borders with Armenia and Georgia are very close by. Surprisingly, we didn’t see a single boat on the lake during our 3-day stay. We also didn’t note anglers or fishermen. I suspected that the water was very salty. Then again I heard that the water from the lake was used for irrigation in agriculture. Appropriate irrigation systems were not recognizable either. An inflow into the lake probably takes place at the west end, part of the lake water also flows off through a stream towards the Black Sea. Çildir Gölü is a beautiful sight with its stark beauty in an open hilly landscape. Many tourists don’t seem to be drawn here. One or the other excursion restaurant at the lake was deserted at the beginning of September; a restaurant at the western end only little frequented.

Turkey’s unique location between Europe and Asia makes it a popular destination for migratory birds, which spend the winter in Africa before heading to Europe for the summer breeding season. The wetlands in eastern Anatolia are probably exactly the same meeting places for the flocks of birds as the much better known bird sanctuaries around the Bosphorus. They are now not nearly as frequently and intensively visited by ornithologists. It is also worth looking for and photographing the birds that rest and feeds here on the Anatolian plateau before their long flight from Northern Europe.