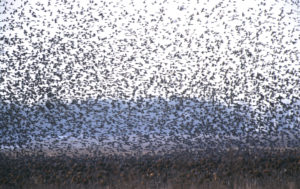 Icy wind drove the snow clouds in the wide valley of the Danube plain in front of it. After it had snowed for a few days, it became noticeably drier, but also significantly colder. Temperatures below -10 ° C were not uncommon. One day, one day after New Years Day 1999, I went on a trip from Budapest down the Danube to the Kiskunság NP. Over the monotonous stubble fields in the wide plain sat brown heaps, which later turned out to be White-tailed Eagles (Haliaeetus albicilla). In the so-called Apaj-Pussta I was able to admire a mass invasion of Bramblings (Fringilla montifringilla). The air was filled with the flight-calls of the finches. As swarms of Common Starlings (Sturnus vulgaris) in autumn Bramblings could be seen over harvested sunflower fields. In the leafless bushes nearby, hundreds, even thousands, of Bramblings were resting. An impressive picture that I wasn’t allowed to experience afterwards. It was particularly noticeable that the Bramblings seemed to be traveling in (almost) pure-specific groups. There was once a European Greenfinch (Chloris chloris) or a European Goldfinch (Carduelis carduelis) in between. But otherwise: only Bramblings. In any case – unlike in Germany – I did not see any Common Chaffinches (Fringilla coelebs) in between.

The first destination of a family trip over New Year’s Eve was Matrafüred, a winter sports resort and resort in the Mátra in northern Hungary. Here, too, there was a remarkable amountof birds to see for Western European standards. The slight shyness of Mistle Thrushes (Turdus viscivorus) in the Apple trees, which we could see practically at eye level from our guesthouse, was a real eye-catcher. The mistletoe was a magical attraction for the Mistle Thrush. Hence the name. One or the other Hawfinch (Coccothraustes coccothraustes) also hung around in the Apple trees. For West Germans this is also a rather rare sight. Otherwise one of the Hawfinches was sitting on a rain gutter directly in front of our roof window in the village of Matrafüred. With a practically imperceptible fill-in flash, I was able to take excellent and very sharp images.