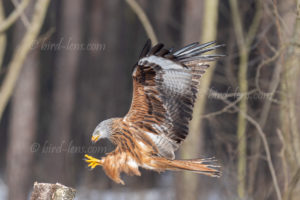 A flash of red and white and with an elegant flight through the pine forest a Red Kite (Milvus milvus) is already sitting on a tree  trunk. An If you want to photograph birds close up in the cold season, a bait site is a good idea. There are tour operators who do this professionally. But you can also set up such a lure yourself. Here in Poland it is even easier, as there is enough forest, also game and the necessary permits can be obtained unbureaucratically. So a bait was set up at a wood storage and chopping area at the edge of the forest. Remains of Red Deer (Cervus elaphus) or Roe Deer (Capreolus capreolus) from the local hunter were used as a bait.

At first only the Eurasian Jay (Garrulus glandarius) was enthusiastic about the meat. On 3 consecutive days with sub-zero temperatures and partly good snow conditions, first a Common Raven (Corvus corax) and then mainly Eurasian Jay came on one day. At first a Eurasian Jay came, then up to several individuals were present. The Common Raven was very careful; on the other hand, after a period of getting used to the site, 3 Eurasian Jay came were together at the bait. Well, the Eurasian Jay is not an ugly bird. The combination of size and brownish color in combination with the light blue-black-and-white wing mark make the Eurasian Jay an eye-catcher. Especially when the Jay flies or quarrels with other con-gener, the otherwise brown bird is very colorful. The white of the hand covers and the blue areas of the arm covers are nice to see. But over time you want a little variety in bird species.

Maybe it had something to do with changing the position of the bait, or simply with the passage of time. In any case, after a few weekends there was movement – in the truest sense – in the matter.

With low temperatures and complete snow cover but sunshine from a steel blue sky, it took a surprisingly long time until the first Eurasian Jay arrived. After some argument about the (small) piece of meat, I felt a certain tension in the bird. Again and again he secured the upper parts of the forest and at some point even stopped feeding completely and only watched the edge of the forest above it. Suddenly I also saw a big bird from a roof window. A truly majestically floating Red Kite came slowly along the edge of the forest with bowed head at treetop height. Suddenly the Red Kite accelerated, made an elegant turn around a large oak tree and came flying from behind onto the cut tree trunk with the bait. What does flying mean here: he almost fell down. He landed on the carcass with his wings spread out and perfectly lit. The intense colors of its plumage were fantastic to see. The raptor was cautious, but also hungry. Nevertheless, it only took a few seconds before the Red Kite rose again with a wide flap of wings.

Fortunately, everything was reliable documented with the Canon EOS 1Dx Mark III in Liveview mode which means 20 frames / sec., noiselessly photographed. The big advantage of the Canon EOS 1Dx Mark III compared to its predecessors is the possibility to use this high frame rate without shutter noise and to track the auto focus (which does not matter here, since the camera is manually focused on the tree trunk with the bait) and to carry out an ongoing exposure measurement.

Apparently two Hooded Crows (Corvus cornix) were in tow of the kite, because their croaking cackling could be heard well. Remarkable: the Red Kite only turned one lap through the pine forest, and then from the other side in a horizontal, fast flight, the bird arrived with legs stretched forwards to the bait and grabed a piece of meat. Great, I haven’t had the Red Milan at a bait site yet.

Now more happened in quick succession. At first the 2 Hooded Crows were interested in the tree trunk with the bait, they were almost in the air, so fascinated by the meat on the one hand, but so skeptical about the circumstances on the other. In between, a Eurasian Magpie (Pica pica) made itself heard with loud, rattling calls. The Eurasian Magpie could also be seen briefly. But not for long, because then suddenly there was a Common Buzzard (Buteo buteo) on the tree trunk by the bait. Carefully, but without haste, one bite of meat after the other was now drawn off and devoured.