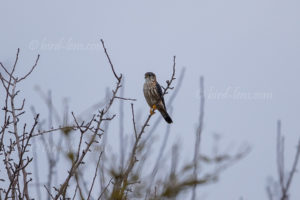 Progress is slow on the little-traveled pothole road. Lucky, because just 100 meters in front of me, a bird flies into an apple tree with a raptor-like flight. This is a winter habitat for the Northern Shrike (Lanius excubitor), which can be seen here in the south of Brandenburg in some years for the 4 – 5 winter months. But this one is different, darker and also a little bigger. It is a male of the Merlin (Falco columbarius), a fast hunter from the Far North.

So far I had seen the Merlin in autumn in the intensively arable Niederen Fläming, also in southern Brandenburg. in one case a female Merlin that I was able to photograph with a captured Sky Lark (Alauda arvensis) in the catch flying deep over the field.

In some years the Merlin can be observed quite well and regularly. In many other years, the little bird of prey, which comes from the far north and sometimes spends the winter with us, or also crosses into the Mediterranean region, is only a fleeting sighting.

When determining the Merlin, increased attention is required. It is important that other falcon species, but also smaller birds of prey with similar hunting behavior (especially the Eurasian Sparrowhawk (Accipiter nisus)) can be excluded. Merlins hunt mainly in open landscapes. This can be heathlands, moors, dune areas, but also over harvested fields and plowed fields. One can get the impression: the clearer the landscape, the more advantageous for the Merlin. Merlins love open and semi-open landscapes, as they mostly catch their prey in flight.

Very often one draws attention to the little hunter by the excited calls of the small birds. The Merlin itself typically approaches its preferred prey in very rapid flight close to the ground. These are small birds in the open landscape, such as Buntings, Meadow Pipit (Anthus pratensis), Eurasian Linnets (Carduelis cannabina) and Eurasian Tree Sparrows (Passer montanus), which live close to the ground or. Sometimes they can also be caught in the air.

Watching a male Merlin hunting in his habitat is a real pleasure. It looks for his prey from a raised spot – if only a protruding field clod is welcome. It then flies very close to the ground and is lightning fast. You have to be careful not to lose sight of him.

The photo  oft he blog shows the male Merlin with its striking gray-blue wing-coverts. Females and young birds are not gray-blue on the upper side, but dark brown. On the underside, they are striped with intense brown on a light background. The malar stripe of the male Merlin is rather inconspicuous. On the one hand, one should consider the hunting and flight methods and pay attention to the typical pointed falcon wings and the tail, which is shorter than that of the much more Eurasian Kestrel (Falco tinnunculus).

A remark that I found in an English bird identification book also seems striking to me: The “Merlin” that flies down the road in front of you is definitely a Eurasian Sparrowhawk. Even this little raptor often hunts close to the ground, but, unlike the Merlin, sometimes follows paths and roads, especially to take advantage of the cover provided by hedges, fences and the like.