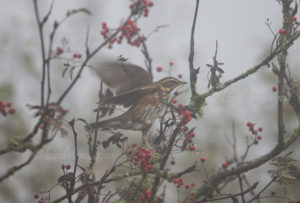 A beautiful Redwing (Turdus iliacus) roam on the lichen-covered branches of the Hawthorn (Crataegus monogyna) to enjoy the red berries in thick fog. A bush of the European Holly (Ilex aquifolium) – also simply called Ilex – in the back of my front yard has been glowing full of red fruits since autumn, too. But only after the New Year do you see songbirds, mainly thrushes – especially Eurasian Blackbirds (Turdus merula) – feeding on the bush in such an amount that the bush is empty before mid-January. In late winter, nature watchers will notice that the red fruits of the Ilex bush are increasingly eaten by Blackbirds. But, the fruits of the European Holly are actually poisonous.

How is that possible for this little bird? In the toxicological literature you might read that 20-30 of the berry-like stone fruits can be fatal for humans.

Only in late winter does a Eurasian Blackbird eat more than 30 fruits a day. It wasn’t like that before. It can therefore be assumed that the fruits were initially inedible for the Eurasian Blackbirds as well. It is to be assumed that both the low temperatures in mid winter and the temporal degradation process of toxins mean that the temptingly tasty-looking fruits are only edible after a while. Again and again you can see other thrushes, especially Fieldfares (Turdus pilaris), Redwings and Song Thrushes (Turdus philomelos) on the berry bushes.

Ornithologists know similar effects from other fruits. Many people still know that Sloes or Blackthorn (Prunus spinosa), Mountain Ash or Rowan berries (Sorbus aucuparia) or Hawthorn fruits are only better edible after the frost and can be used for jam.

But it’s not just the frost that plays a role here. Sloes are no longer noticeable when walking through a winter landscape of hedges. The berries of the Black Elder (Sambucus nigra) have not existed for a long time. Only a few Dog Roses (Rosa canina) can be seen, but the Hawthorn and the Guelder Rose (Viburnum opulus) are still full of red fruits. The black fruits of the Ivy (Hedera helix) are still green until late in winter. They only turn black at the end of winter and are then eaten by various birds. If it were only after the frost, all the fruits would be edible at the same time and the birds lived in excess for 2 weeks before the rest would eventually rot and starvation set in.

One could almost get the thought that a caring spirit would ripen the fruits one after the other so that the birds are cared for through the whole winter.

But presumably the laws of evolution are the driving force. Plant species that follow the same distribution strategy should better not offer their fruits at the same time. Because the plant has an advantage from the energy-intensive fruit production. Most of the time, the kernels are resistant to the sharp digestive juices in the bird’s stomachs. A bird excrement at some distance then creates a new bush again.