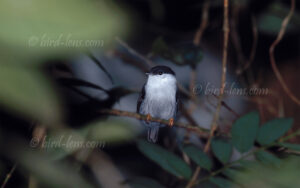 Just before the turnoff to NP Monte Pacoal is a great granite cone that really looks like a finger. This is the summit of Monte Pascoal which is only 536 m high, but looks very impressive.

The weather is quite sunny all the time, but humid. But when I get to the NP, I experience another tropical shower. The park looks really nice – but is apparently deserted by people. I just drive in and park my car at the Visitor Center. I walk a little bit in the surroundings.

There is only one trail, as described in the book “Where to find Birds in South America” by Nigel Wheatley, and it goes from the Visitor Center down to a creek. At the beginning the thicket is secondary forest, so pure barbecho or capoeira as they say in Brazil. I pack my backpack with the Nikon Nikkor AF-I 300mm f/2.8 D ED and the Gitzo monopod on my shoulder. It could be a beautiful afternoon. The air is quite clear by now. High in the trees, out of my view, a few parakeets are frolicking. The first bird I see is inevitably a Manakin, it’s a male of the White-bearded Manakin (Manacus manacus). The male comes very close and clings to its horizontal branch. Great, it looks. Otherwise it doesn’t do much. Unfortunately, it can’t be persuaded to show off its courtship display either. I am able to photograph the male head-on with the Nikkor AF-I 300mm f/2.8 D ED lens (sometimes afterwards with 1.4 converter) and the Metz Mecablitz 40 MZ-1i flash. I start at some distance and slowly get closer, carefully moving the leaves and branches to the side to have a clear view.

After this good start I walk down the steep gully. There I sat down. The view of the brook, which splashes down the granite rocks is great, besides, the sun shines so beautifully into the primeval forest. I am rewarded for my perseverance after some time with some more species of the Brazilian coastal rainforest in the Mata Atlântica.

White-bearded Manakin males spend most of their time at communal displaying sites (leks). The largest leks or courtship arenas have an area of more than 250 m². Within the territory, each male maintains a small “yard”, which has a diameter of less than 1m². This is located on the forest floor; it is cleared of leaves, twigs and debris. At this site, males perform a variety of individual courtship displays, usually with many other males in close proximity. The courtship sites at these leks are considered classic leks because the males can see and hear each other. Males stay in their territory most of the day (more than three quarters of the day). At that time I did not realize that I must have been in the middle of such a courtship area.  This may have been due to the fact that I did not see any other males in the vicinity. Although competition for individual courtship sites is very high, once the courts are established there is little aggression between males of the White-bearded Manakin. Males without established courts sometimes become aggressive, that is, they hunt for long periods and attack when they enter an already established area. As an observer who has seen White-bearded Manakins on the Macuco Trail in Misiones, Argentina, and on the Poco Preto Trail in Parana in southern Brazil, as well as at 2 sites in Bahia on the Brazilian coast, it is noteworthy that I had not perceived any courtship arena at all in any of the encounters. Perhaps I should have done better research in the literature beforehand – and prepared myself better behaviorally. It is also interesting to note that the home ranges of the males include a courtship arena and a bathing area. It is similar for the females. However, the females also maintain nesting territories near streams, which should actually make tracking down a pair of White-bearded Manakin even easier. Sexual behavior is interesting – and should also help in locating White-bearded Manakins. Namely, because White-bearded Manakin are promiscuous, with both males and females mating in a multiple system. Lek placement follows what is known as a hotspot model and is associated with areas of high food supply. These areas of high food supply result in a high abundance of females foraging. This allows males to encounter the greatest number of females possible.

In order to meet the growing demand for top images of the rarer species of Palaearctic Bird-lens.com has specifically made trips to remote places. This to do everything to ensure excellent photos of the Birds of the Western Palearctic and beyond. The yield of pictures also of rare Western Palaearctic birds is very good. There are other nice images of birds, that you will find behind the tab “Picture Shop“. Just give a notice if you need a picture of a bird which is not online.