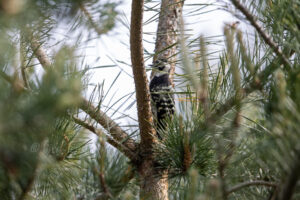 The parents of the young Lesser Spotted Woodpeckers were very active in feeding at the breeding cave at short intervals over a period of observation that lasted for weeks. In the beginning it was a very inconspicuous coming and going of the parents. Later the nestlings could be heard calling softly rhythmically. Nevertheless, the young Lesser Spotted Woodpeckers could only be heard clearly at the end of the feeding period.

Now the place seemed deserted. Then I heard the rhythmic calls that characterize the song of this little woodpecker. Will the parents get themselves back in the mood with pairing songs? Do they go to the second offspring oft he season? But then it turned out that the incessant rhythmic shouting, a bright “Kikikiki” that stayed on the same pitch and seemed to consist of incessant individual elements, was significantly finer, even quieter, than it was remenbered was from the hard tones of the male’s song in early spring.

So it could have been the youngs after all. And lo and behold. After some patient searching in the tops of young, but taller, pines, I saw a young bird. It had huddled so close to the trunk and then used the long pine needles for cover that it was very difficult to spot. But through the incessant shouting I was able to spot it. Definitely a young individual. The dirty red front cap was nice to see. The bird looked like a washed-out, dirty sibbling of the male. The young bird was not fed. From time to time I saw it peck out tiny creatures from the bark like tweezers. The bird was not fed during the observation period; Adult birds could not be made out in the vicinity either.

I used the Canon EOS-1DX Mark III with the Canon EF 600 / 4.0 L IS II USM lens on a FlexShooter Pro head, which was mounted on my Gitzo Systematic GT 3542 XLS tripod – a large carbon tripod.

In order to cope with the growing demand for top images of the rarer species of the Palearctic, Bird-lens.com endeavors to further expand the range of images of birds in the Western Palearctic. Trips to remote locations to snap pictures of rare birds of the Western Palearctic have been very successful. The beautiful picture on the blog is just a first impression, which you can find very soon in the gallery in the “Picture Shop“. Just leave a message if bird-lens.com can serve with a picture.