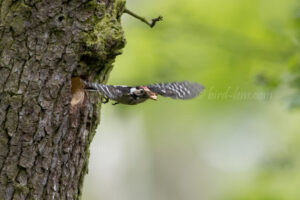 While the male of the Lesser Spotted Woodpecker (Dendrocopos minor) usually approached the breeding cave in a lean Alder tree (Alnus sp.) approx. 10 cm below the lower edge and then took action a little later, i.e. to hatch, the female more often first flew first to a dry branch above the cave and then started to fly to the breeding cave. When going out, both sexes sometimes took poop bags with them. While hatching took place quickly, both small woodpeckers often waited a while before taking off, looking out of the breeding hole before. The departure took place both in direct extension of the orientation of the breeding cave to the north and occasionally turning directly from the cave to the east.

A few more comments on the observations may be of interest.

The feedings were spaced with pauses of approx. 5 minutes, whereby it could happen that both small woodpeckers met at the nest at the same time or – even meet – twice in the nest. 2 small woodpeckers in such a small breeding hole will of course not work. So the last one had to leave as soon as possible and then visit the breeding hole again a little later.

A Wryneck (Jynx torquilla) drew attention with its distinctive laugh nearby. This was immediately acknowledged by both Lesser Spotted Woodpeckers. A certain anxiety could be observed. While the female left the brood hole after the “song” of the Wryneck and remained on the branch  described above and secured the environment, the male woodpecker flew to the cave and remained motionless for several minutes in front of the cave. Later the male looked out of the cave and – perhaps demonstratively – took up the entire space of the entrance hole. It may be speculative. But perhaps the Wryneck is famour for Lesser Spotted Woodpeckers as a nest predator or, worse, as a breeding hole aggressor.

The area with the Lesser Spotted Woodpecker broods is a neglected wetland directly on a freeway entrance. With its distinctive laugh, the Eurasian Green Woodpecker (Picus viridis) drew the bird watcher’s attention to its presence in the alder bush in early spring. The accelerating “Klew-Klew-Klew-Klew-Klew-Klew” could be heard frequently in March / April – that is, during the mating and breeding season. In the interior of the damp forest you can see a surprising number of trees with distinctive woodpecker holes in the trunk.

For the photo I used the Canon EOS-1DX Mark III with the Canon lens EF 600 / 4.0 L IS II USM on a car window tripod. later I mounted the camera on a FlexShooter Pro Lever Black on a tripod Gitzo Systematic GT 3542 XLS. More images of flight ins and outs of the Lesser Spotted Woodpecker, you will find in the gallery. Have fun!

In order to be able to satisfy the growing demand for top shots of the rarer species of the Palearctic, bird-lens.com explored the home ground and has made targeted trips to the most beautiful natural landscapes of the world. This was done to be able to take excellent photos of the birds of the Western Palearctic. The yield of pictures of rare Western Palearctic birds is very good. The nice picture you see in the blog is only a first impression, what you will find very soon behind the “Picture Shop” tab. Just let bird-lens.com know if you need a picture of a bird species before new pictures are online.