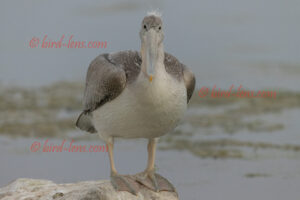 Nowhere else in Europe or the Middle East can you get so close to Greater Flamingos (Phoenicopterus phoenicopterus) or Western Reef-Herons (Egretta gularis schistacea) as in the R’as al-Khor. Many waders fish in the shallow waters just meters from tourists armed with binoculars and cameras. The Western Reef-Heron´s plumage shows two color phases. There is a light-colored form similar to the Great Egret (Ardea alba) and a slate gray form. However, the beak of the two color variants of the Western Reef-Heron is more orange-yellow to flesh-colored. Further away in the riparian thicket there are rarities such as the Great White Pelican (Pelecanus onocrotalus) or the Lesser Flamingo (Phoeniconaias minor). If you’re lucky, you can see even rarer vagrants like the Dalmatian Pelican (Pelecanus crispus). There are also species that are quite common her, but spectacular by Central European standards, such as the Glossy Ibis (Plegadis falcinellus), Slender-billed Gull (Chroicocephalus genei) and Isabelline Shrike (Lanius isabellinus). Otherwise there are more common waterfowl such as Garganey (Anas querquedula), Eurasian Spoonbill (Platalea leucorodia) and Great Cormorant (Phalacrocorax carbo sinensis).

A highlight of our visit was the presence of more than 15 Greater Spotted Eagles (Clanga clanga). The dark brown bird of prey is striking in flight due to its sheer size and – even more than other eagles – its wings spread out like boards. It overwinters in large numbers along the mangrove areas in the west of the Emirates, where it prefers to hunt for fish and waterfowl. In contrast, its smaller relatives, the Lesser Spotted Eagle (Clanga pomarina) and the Steppe Eagle (Aquila nipalensis) from the central asian steppes, can be observed much less frequently. However, birds in young or winter plumage in particular pose a real challenge in terms of identification at longer distances.

R’as al-Khor, with its numerous belts of mangroves and reeds, is certainly one of Dubai’s most important wetlands. Not far from the metropolis east of the Dubai Creek, it is particularly worth a visit. This natural area acts like a green magnet for wintering guest birds. The area surrounded by Highways undoubtedly belongs to one of the national top addresses for waterfowl and birds of prey. As soon as you drive in, you can spot the region’s most common gallinaceous bird, the Grey Francolin (Francolinus pondicerianus), on the hard shoulder or in the adjacent bushes.

If you search patiently, smaller flocks of this grey-brown, very sociable bird can be found, which sneak away when threatened or fly away cackling loudly like partridges.

Several blinds and observation hides along the shore offer excellent and close views of the bird life and suggest that the reserve’s feathered residents have largely become accustomed to the human visitors, especially as urban rangers keep order in the tryst of the many groups of visitors.