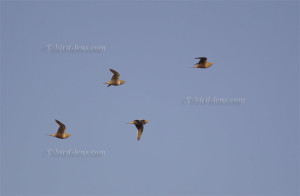 The first chains of Sandgrouse appear early in the morning. Still, it is remarkably cool. But very soon, the air will be heatened up to the highest degrees. Sandgrouses do not only arrive quenching their thirst on the extensive waters. Species such as the Arabian Chestnut-bellied Sandgrouse (Pterocles exustus erlangeri) and Pin-tailed Sandgrouse (Pterocles alchata) have the ability to store water in specially trained breast feathers and to be able to transport it over long distances to the nest, which ensures the climatic regulation of the nest through evaporative cooling. Of course, the water input also serves to supply the chicks. Oases such as “Duck Lake” and “Swan Lake”, which already refer to feathered guests in their names, also attract a number of songbirds with their sometimes lush shrubbery. Among the specialists that are particularly attractive to ornithologists is the dainty Asian Desert Warbler (Sylvia nana), which, unlike other members of the genus, inhabits extremely dry habitats. The Isabelline Wheatear (Oenanthe isabellina) looks very long-legged compared to other Wheatear species and differs from them in its predominantly pastel-colored plumage; he is only winter guest in the emirates. Several species of shrikes can also be found in the same habitat. The Arabian Shrike (Lanius excubitor aucheri) is the most common of them and is closely related to the Steppe Grey Shrike (Lanius pallidirostris), which is particularly paler on the beak and wings. Both taxa were until recently regarded as subspecies of the so-called Mediterranean or Southern Grey Shrike (Lanius meridionalis). According to the latest molecular-biological findings, the Southern Grey Shrike known as the Iberian (Southern) Grey Shrike is restricted to the Iberian Peninsula and southern France. The Woodchat Shrike (Lanius nubicus) also likes to look out for prey on tree tops or bushes. The Black-crowned Sparrow-Lark (Eremopterix nigriceps melanauchen) lives in a even drieer environment, which differs greatly in habit from other members of this bird family and is only about two thirds the size of a Eurasian Skylark (Alauda arvensis). The males, which are characterized by their distinctive black and white head markings in addition to the typical conical beak, perform both conspicuous singing flights and courtship displays. In the sweltering midday heat, the territorial birds rest under thorny dwarf bushes and allow the observer to come within a few meters. Along the reed belt of Saih al-Salam, the Western Marsh-Harrier (Circus aeruginosus) – actually a mangrove dweller in the Emirates – can often be observed hunting. You can also see a Pallid Harrier (Circus macrourus) passing through. Both undoubtedly benefit from the abundance of birds in the artificially created wetlands. In addition, there is an eastern relative of the Black Kite (Milvus migrans), the Black-eared Kite (Milvus [migrans] lineatus), which is only rarely observed in the Middle East and is not definitively classified taxonomically. This species/ subspecies occurs mainly in Siberia and from there to northern China and southern India . It differs from the European representative by a dark ear patch and slightly lighter plumage.

This is a special habitat, which welcomes visitors south-east of Dubai near Saih al-Salam, where an artificial landscape with ponds and reed zones was created in the middle of semi-desert and acacia savannah for the Expo 2020 world exhibition. Bird life can be seen from the shores of the wetlands.