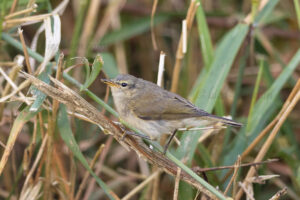 Still a little uncertain, a chubby something wobbles out of the dense willow (Salix sp.). Surprisingly unerringly, this Phylloscopus-warbler, which has probably just fled, caught a damp moth from the early morning, hits it a few times so that the scales squirt and devours it with relish. A little later it can be seen on a bare branch of the willow. This time it has a small ladybug in his beak and crushes it a little later. Another 5 minutes later a caterpillar has to be the prey. This too is specifically grabbed with the beak and then devoured.

This was once a very successful juvenile individual – probably a Common Chiffchaff (Phylloscopus collybita) – which despite its young age was very successful at acquiring prey; first a moth, then a ladybug, and then a caterpillar. A few young bird species also roamed around in the willow bushes. A just fledgling Common Nightingale (Luscinia megarhynchos), a young Greater Whitethroat (Sylvia communis) and a young Lesser Whitethroat (Sylvia curruca) could be photographed.

In southern Brandenburg only 2 Phylloscopus warblers come into question. On the one hand the Willow Warbler (Phylloscopus trochilus), on the other hand the Chiffchaff.

A certain amount of skepticism is always appropriate when identifying Chiffchaffs, especially juveniles.

The descriptions are mostly available for the adult specimens. These state that in spring and summer the upper side is dull or dingy green or brownish-olive in colour. An exception is the somewhat paler or lighter green rump and uppertail coverts; The wing-coverts have dark centres, appearing blackish at a distance, and are broadly fringed pale olive-green The ‘face’ is characterized by a thin, pale yellow or whitish supercilium above the eyes. The stripe runs from the upper lores over the eye to the ear covers, where they fade. The dark of the lores extends as a fairly thin eye-stripe across upper ear-coverts, there becoming more diffuse but underlining supercilium. The Chiffchaff has a noticeably broken chain of white dabs around the upper and lower eye area, encircling the eye like two crescents. The cheeks and ear-coverts are pale or yellowish-green, but with darker or brownish feather bases and can appear darker. The underparts are dull white to off-white, but with breast and flanks suffused with yellow and with a duller or dingy buff tone on breast sides extending to the flanks. The beak is brownish, with a paler or orange base on the lower mandible. The most prominent feature is repeatedly mentioned and that is, that the legs are black. But there are overlaps between Willow Warblers and Chiffchaffs. In some Chiffchaff specimens they can appear significantly lighter, rather dark brown to grey-brown. The tops of the feet are also black, but the soles are yellowish in contrast, which can only be seen in good close-up photos as in the image of this blog.

The breeding season of Chiffchaffs is from the end of April/beginning of May to the end of July. Two broods are not uncommon. Since the incubation lasts 13 to 14 days and the subsequent nestling period lasts about 12 to 13 days, and in the fledgling period young chiffchaff are fed by their parents for a few more days after leaving the nest until they are completely independent, this young chiffchaff has passed this phase obviously already. This young chiffchaff could well have come from a second brood.

To cope with the growing demand for top shots of the rarer species of the Palearctic, Bird-Lens is keen to enrich the range of pictures of birds you can find in the western palearctic and beyond.  Trips to various sites to capture images not only of rare birds of western palearctic were very successful. The nice image of the blog is only a first impression, what you will find in the gallery in the “Picture Shop” very soon. Just give bird-lens.com a message, if bird-lens.com could serve you with an image needed before the new pictures are online.