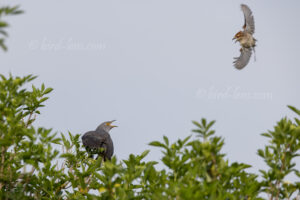 The little songbird vehemently attacks the Common Cuckoo (Cuculus canorus) on its perch. Seemingly fearless, the female of the Red-backed Shrike (Lanius collurio) attacks. She cannot accept a parasite that endangers her brood.

At the end of May, in the first twilight, a diverse and impressive, almost deafening, concert of voices can be heard from the wide sedimentation basins of the alluvial ponds near Golßen in southern Brandenburg. The morning sun creates a very special atmosphere. I can quickly spot a male Whinchat (Saxicola rubetra), then a Marsh Warbler (Acrocephalus palustris) and finally a pair of Red-backed Shrikes in the beautiful morning light and photographed perfectly from a short distance.

All potential host birds react very sharply to the presence of the Common Cuckoo. The aggressive approach of the female Red-backed Shrike is also not uncommon. How and why do female Common Cuckoos choose a host nest? Of course, that would be interesting not only for science but also for those potentially affected. There is some evidence that the females have strict host preferences, i.e. only parasitize certain bird species. With this specialization, the eggs are better adapted in size and color to the target bird species and have a higher chance of remaining undetected. Whether and how such parasite-host bird relationships work has not yet been fully researched.

How right the female red-backed shrike is is shown by the fact that her own young have practically no chance of rearing, since the host young are unwanted competition in the nest. Therefore, Common Cuckoo chicks lift eggs or host young piggy-back over the edge of the nest in a feat of strength unimaginable for newly hatched young birds. They are cleared out eight to ten hours after hatching. In the first three or four days, the urge to clean the nest is associated with a particular irritability of the back. As soon as the nestling feels something lying on its back, it tries to maneuver it over the edge of the nest.

I also got to know and appreciate the alluvial ponds near Golßen last summer. Unfortunately, the site is not open to the public and I had to get permission from the operator. The alluvial ponds are company premises and may otherwise only be viewed from the outside. But that is also sufficient for sightings of flying birds.