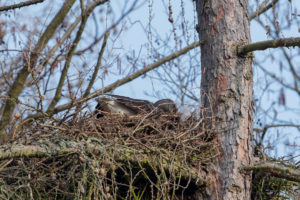 A head looks cheeky from a huge nest 8 meters high in a European Larch (Larix decidua) in a sparsely leafy, mixed forest. The orange-pink beak is conspicuous and, in connection with the gray-brown head, only allows one breeding species to be itentified: a Greylag Goose (Anser anser). The bird sits crouched on the nest and would otherwise not have been noticed by the passing observer in the pine forest. Actually in search of the Northern Goshawk (Accipiter gentilis), this discovery was a real first. I had never found a Greylag Goose nest other than on the ground. A subsequent research in the internet did not yield any indications either. The nest seems to have a rather shallow hollow. Otherwise the big goose would be able to hide deeper in the nest. The fact that the Greylag Goose breeds is also supported by the fact that the goose was still sitting on the nest on the following days, albeit in a different way. So the goose seems to change the direction of the seat from time to time and probably also to re-sort the eggs. A few days later, the edge of the nest was padded with nest dunes to such an extent that individual dunes protruded from the sides of the nest.

Something similar to a breeding goose in a bird of prey nest can only be found in Central European literature for the Ruddy Shelduck (Tadorna ferruginea). This bird prefers nests in rock caves or cave-like structures and depressions. But the Shelduck also uses abandoned raptors nests for her eggs.

Now the question is which raptor built the nest. The Goshawk had successfully brooded in a nearby nest and hat raised 2 young last year. But its nest was much smaller. White-tailed Eagles (Haliaeetus albicilla) might be an option. These eagles build huge clumps of branches and twigs. The nest hollow is lined with grass and moss. In Central Europe, mainly old trees are used for nesting. In Northern Germany, beeches (Fagus sylvatica) are preferred, in Brandenburg mainly Scots Pine (Pinus sylvestris). New nest structures have a diameter of about 1.2 to 1.5 meters and a height of 50 to 80 centimeters. That could roughly correspond to the size of the observed nest. It is known that many White-tailed Eagles areas have one or more changing nests, which are often used alternately for decades. If it’s a White-tailed Eagles nest, one can only hope that the Greylag Goose will go unmolested. This year the Goshawk called from close by, without the Goose appearing noticeably impressed or even frightened. It will be exciting to see how the young will feel comfortable in the nest and then come out of the nest.

Above all, Bird-lens is a website that aims to meet the growing demand for high quality images, especially of birds in the Western Palearctic. In order to be able to satisfy the demand for top recordings of rare bird species around the world, Bird–Lens.com observed the immediate surrounding countrysides in particular, but also made targeted trips to distant places such as Asia, Africa or South America. All to be able to take excellent photos of birds. The yield of pictures, not only of rare West Palearctic birds, is very good. The picture on the blog is only a first impression, which you will soon be able to find in the “Picture Shop” tab. Just leave a message if bird-lens.com can serve with a picture.