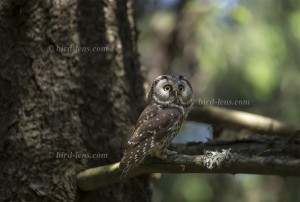 The little owl seems almost curious to look down at the excited observer. He had flown up without any sound. Now the bird alternately looks down (to the photographer) and then up again – probably to identify avian enemies in good time. The yellow iris reflects the sun and sparkles. It is a Boreal Owl (Aegolius funereus) that has to look after its brood. The owl’s veil is wide open so that the eyes appear wide open.

All habitats have in common that they have a high number of woodpecker holes – in Europe from the Black Woodpecker (Dryocopus martius). Large clearings and windthrow areas must also be available. The populated forest areas must therefore already be of a certain age. Nesting boxes are usually very well received by the Rauhfusskauz, as the Boreal Owl is named in german.

A certain amount of common occurrence is also possible. In the lowland areas of Lower Saxony, for example, Tawny Owls breed mainly in the edge areas of the large, contiguous forests, whereas the Boreal Owl populates the closed forest.

On average, the diet of Boreal Owls consists of 94% small mammals and 6% small birds up to the size of thrushes. The food composition can change considerably depending on what is available and what time of year it is.

This means that the Boreal Owl is highly dependent on mouse gradations. So it does happen that in some consecutive years hardly any pairs brood, while in other years the numbers of breeding pairs seem to explode straight away. Boreal Owls are perch hunters who, depending on the density of prey, require 9 to over 100 attempts to hunt successfully. If a prey escapes, the Boreal Owl chases its prey and even fishes it out from under stones or roots.

The Boreal Owl creates prey depots all year round in tree hollows, forks of branches, at break points in trees and similar tree areas. In one case there were over 70 mice in a breeding cave with just 2 nestlings. In winter, freshly cut prey is kept warm under the belly plumage. Frozen prey from a food depot is thawed in this way. At a temperature of -22 degrees Celsius, for example, an Boreal Owl needed just 22 minutes to thaw the frozen mouse using this method.

In the wildlife enclosure in Neuschönau in the Bavarian Forest National Park you can take really beautiful and impressive pictures of Boreal Owls. It is also often not possible to recognize that you photographed in a (free) enclosure. And both the perspectives and especially the motifs are really great. The wildlife enclosure area in the national park center below the Lusen summit has an area of ​​200 ha. The pure enclosure area is approx. 40 ha. 45 native animal species live in their natural environment in the spacious enclosures and large aviaries of the open air area. Birds include the Boreal Owl (Aegolius funereus), the Long-eared owl (Asio otus), the Ural owl, the Pygmy Owl (Glaucidium passerinum) and the Three-toed Woodpecker (Picoides tridactylus) can be seen.

In order to satisfy the growing demand for top shots of the rarer bird species of the Palearctic, bird-lens.com has made targeted trips to the most beautiful natural landscapes of Brandenburg or Berlin but also to distant places. All this in order to be able to take excellent photos of the birds of the Western Palearctic. The yield of pictures also of rare Western Palearctic birds is very good. The nice picture you see in the blog is just a first impression, what you will find in behind the tab “Picture Shop” very soon. Just let bird-lens.com know if you need the picture of a bird species before new pictures are online.