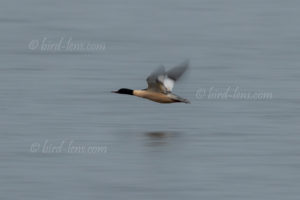 A flying Common Merganser (Mergus merganser) low over the Blankensee in Brandenburg only 20 km south of Berlin. It was a gray day and the foggy clouds did not allow really short exposure times with acceptable ISO ​​despite the Canon EF 400mm f / 2.8L IS II USM camera lens. A few duck birds flying past should be photographed with a special dynamic impression. The use of a ProMediaGear GKJr Katana Junior Teleneiger, which is almost perfect for taking pictures of flying birds, was advantageous.

I was able to follow the movement of the bird over the mirror-smooth water surface in the viewfinder over quite a long period of time. The lens followed the bird’s flight path exactly. Although the exposure time was only 1/50 sec., the bird itself is shown in focus, while the background is blurred. This effect is particularly beautiful with the structure and color of the homogeneous background of the lake area. The effect of fuzzy wings underlines the dynamism of bird flight. Image stabilizers are quite helpful in this special application.

Photographing flying birds in their environment is certainly one of the most demanding and at the same time most satisfying tasks in animal photography. Focussing is not that easy in that case because of the changing background and changing distances as well. A professional autofocus can solve that  problem – namely the automatic focus tracking. You don’t need a Canon EOS 1DX Mark III for this. but if you already have one, that is of course an added advantage. The setting for automatic focus tracking is called AI-Servo at Canon. In addition, the Canon EOS 1DX models also offer the option of automatic focus tracking, which also includes the color of the objects.

Birds in Flight: You can start with birds of prey gliding against a blue sky. The set exposure time should be as short as possible – especially during tests and as a first beginner – in order to freeze the movement of the image. The automatic shutter control (Tv) is ideal for this. The exposure time is preselected manually and the aperture is automatically adjusted by the camera. The raptor in gliding flight should also be possible with 1/500 sec. In order to otherwise prevent camera movement, the exposure time should be a maximum of 1 / 1,000 sec. And even then, not all of a bird’s “moving parts” might be sharp. Often, however, the effect of blurred wings is also desirable, as these give the picture naturalness and movement. However, it is essential that the bird is otherwise sharply photographed. The combination of open aperture and short exposure time quickly reaches the limits. It is therefore advantageous to combine a short shutter speed and an open aperture with the automatic ISO. Image stabilizers are unlikely to play a special role in the majority of regular applications – i.e. with very short exposure times of less than 1 / 1,000 sec.

With a little practice, (somewhat) longer exposure times can be used as a stylistic device. This can be seen very nicely in the picture of the blog.