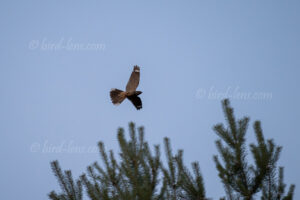 The sun has set already. The location which was so productive only some years ago is very quite. 3 Common Cuckoos (Cuculus canorus) attracted by the high-pitched call of the male chase each other over the heath, which is overgrown more an more. I am disappointed when I leave the site at around 9:30 p.m. In previous years I had the first contact with a Nightjar already around 8:00 p.m. In the car already I decide  to stop only a short distance later. After playing the tape oft he song of a nocturnal guest of Brandenburg heath in summer, immediately I hear a discreet purring from a wood right in the landscape in front of me. The rhythmic purr of the Eurasian Nightjar (Caprimulgus europaeus) is increasing in volume in the background – as it was some years ago. And suddenly out of the wood in growing dusk an aggressive flight approach can be noticed. With the wings held high, the bird almost looking like a flying V, the Eurasian Nightjar flies in my direction, only to change direction a few meters in front of me.

The male Nightjar begins to patrol its territory. Slow, excessive wing beats over pine trees (Pinus sylvestris) enhance the impression of a relevant actor in the night. It is beautiful to admire the white spots on the tail edge and the primaries. Only a few moment, this event takes place; then the Nightjar has disappeared again in the adjacent ash grove. A short time later, you can hear the singing of the Nightjar from another location. Again and again Eurasian Nightjar approach in the growing darkness. A second individual appears only to be chased over the heath in front of me.

I stay for half an hour and I am happy, that these encounters are still possible in the former military training areas around Jüterbog in the south of Brandenburg.

For the images I used mainly the Canon EOS-1DX Mark III with the Canon EF 85mm 1.4 L IS USM free hand.

It was the first hardcore outdoor excursion for the Canon EF 85mm f / 1.4L IS USM. This lens has a lot to offer and proved to be very good for available-light-wildlife-photography as well. After long deliberations, to stay with the Canon EF 85mm f / 1.8 L USM and to switch to the 1.4 I did it eventually. The sharpness is terrific even at the apparent end of 1.4 and the autofocus is on the point and is extremely fast. The autofocus is said tob e faster than the Sigma 85mm 1.4 ART and much faster that the Canon EF85mm 1.2 L II USM. I cannot prove this, as I did not posess these lenses. But I was impressed how reliable and perfectly to the point the focus performed on the rapidly flying Nightjar.

In order to be able to satisfy the growing demand for top shots of the rarer species of the Palearctic, bird-lens.com explored the home ground and has made targeted trips to the most beautiful natural landscapes of the world. This was done to be able to take excellent photos of the birds of the Western Palearctic. The yield of pictures of rare Western Palearctic birds is very good. The nice picture you see in the blog is only a first impression, what you will find very soon behind the “Picture Shop” tab. Just let bird-lens.com know if you need a picture of a bird species before new pictures are online.