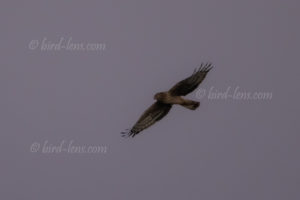 The Hen Harriers seem to have chosen the luch as a sleeping place for the nights in wintertime. High up on the broken tree trunk, Hen Harrier shook iots plumage for a while, before going on short hunting trips. Finally, a Eurasian Sparrowhawk (Accipiter nisus) flew over the marsh birch quarry forest and also passed the Harriers resting place. The female Eurasian then left the grassy parts of the swamp and disappeared into the adjacent forest. Suddenly a second Eurasian was in the air – a female as well. Together the two flew westward. It was interesting that two days earlier a male Northern Harrier could also be seen in the open part of the swamp in front of a Pine tree (Pinus sylvestris). So the area could well be a sleeping place for hen harriers in the winter period. A place in the peat moss-sedge-cottongrass reed seems to be preferred. The Purple Moor-grass (Molinia caerulea) can be clearly seen. The Purple Moor-grass is socialized among others with Tussock Cottongrass (Eriophorum vaginatum), Wild Rosemary (Ledum palustre), Bog-rosemary (Andromeda polifolia) and Common Cranberry (Vaccinium oxycoccos).

In this context it is interesting that at the Federsee, an extensive wetland area in Upper Swabia in southern Germany, Northern Harriers were studies by scientists very intensively until the 1990s. The subjects of the studies were migration, wintering and behavior of the Hen Harrier in the Federsee moor. The birds were counted and observed at the roosts.

Hen Harriers can be seen regularly in the Federsee moor from mid-September to the end of April. With a maximum of 155 hen Northern Harriers, the Federsee moor is probably the most important resting place for Northern Harriers in southern Central Europe. In the Federsee-Moor, female Hen Harriers arrive earlier in autumn and leave later in spring than adult male birds. In contrast to adult male birds, the number of female Hen Harriers is lower in spring than in autumn. It is assumed, however, that the differences in migration behavior are due to age and not to gender. For climatic reasons, the number of Hen Harriers is lower in winter than during the main migration times. The number of Northern Harriers varies from year to year, as the Common Vole (Microtus arvalis), their main food source in southern Germany, varies in occurrence. Every 4 years the number of Hen Harriers is therefore rather low. Hen Harrier roosts in the Federsee moor are located on extensive sedge meadows of Caricetum approxpinquatae and Caricetum gracilis and not too dense Reed beds (Phragmites australis). Locations are revisited for decades. There can be several sleeping places at the same time. Seasonal changes in the vegetation structure and disturbances by predators are the reasons for changes in sleeping places. Hen Harriers sleep in groups on the ground, usually on a different place every night.

In order to cope with the growing demand for top pictures of the rarer species of the Palearctic, Bird-lens.com endeavors to further expand the range of images of birds in the Western Palearctic. Trips to nearby and remote locations to snap pictures of rare birds of the Western Palearctic have been very successful. This nice picture of the blog is only a first impression, which you can find very soon in the gallery in the “Picture Shop“. Just leave a message if bird-lens.com can serve with an image.