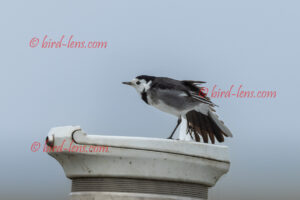 Normally, the Pied Wagtail (Motacilla alba yarrellii) occurs in Germany in winter as a vagrant in the north-west, especially at the North Sea. In 2021, for example, the species was found on Hohe Klint near Oxstedt in the district of Cuxhaven, on the island of Borkum, on the salt marshes of Juist or (on several occasions) on Heligoland.

All the more astonishing that in winter 2021 a trip to the north of Germany´s capital, Berlin, was enough to observe and photograph a male of the Pied Wagtail at close range. The species was stationary since Monday, December 6, 2021, and could be admired and also well photographed while foraging on a stretch of 300 meters along a sewage plant drain. It was observed together with Water Pipits (Anthus spinoletta), Grey Wagtails (Motacilla cinerea) and also a White Wagtail (Motacilla alba) especially at the outflow of the water drain from the highway underpass. It was amazing how many birds used the outflow to feed on the numerous mosquitoes and other insects buzzing in the air.

When I arrived around noon, I was impressed oft he unpleasant environment. Not only that the highway bridge of a connecting road was rebuilt, also on the highway was worked diligently and last not least a completely new 380 KV powerline was laid. So there was plenty of hustle and bustle. On the other hand, I recognized the advantages. One advantage was namely that the – otherwise probably fenced-off area – was very well accessible and also reachable by cars. In short distance to a grate over the outlet of the drainage could be parked. But, initially, the Pied Wagtail was – of course – not present.

A little later the Pied Wagtail was standing on a stone in the upper part of the newly built fill of the sewage plant drain. Unfortunately, the Pied Wagtail disappeared before the first photo could be taken. The present photographers decided to wait in the cars for the Pied Wagtail in order not to frighten it. On the previous days the grate of the outlet had turned out to be especially popular with the Pied Wagtail. And so it was. The Pied Wagtail came flying audibly from some distance and promptly took a seat on the parapet. After some time, it was flown around by mosquitoes all the time and it also looked for an insect. But the bird didn’t seem to be really hungry, because a short time later it took comfort posture and started to stretch and preen. In the process, the beautiful photo of the blog was taken.

This individual oft he Pied Wagtail was probably very shy in the beginning and could only be observed from a distance – mostly or often flying off together – with a White Wagtail. It was also seen together with Water Pipits and other Wagtails searching for food for quite some time. When approached, the birds flew off together. This quite high flight distance has apparently given in the meantime. The photo was taken with a Canon EF 400mm f/2.8L IS II USM – lens with 1.4 – converter on a R 5 – camera at a distance of less than 30 meters.

Even if the Black Wagtail cannot keep up with the small sensation of the Dusky Thrush (Turdus eunomus) in the middle of the Erzgebirge (Ore Mountains) near Chemnitz in southern Saxonia, this wagtail subspecies is not seen so often in eastern Germany.

At least, for bird-lens.com, the Pied Wagtail, is a nice addition to the Germany list.

In order to satisfy the growing demand for top shots of the rarer species of the Palearctic, bird-lens.com has made targeted trips to the most beautiful natural landscapes of Brandenburg or Berlin, but also to distant places. All this in order to be able to take excellent photos of the birds of the Western Palearctic. The yield of pictures even of rare Western Palearctic birds is very good. The beautiful picture you see in the blog is just a first impression, what you will find in behind the tab “Picture Shop” very soon. Just let bird-lens.com know if you need the picture of a bird species before new pictures are online.