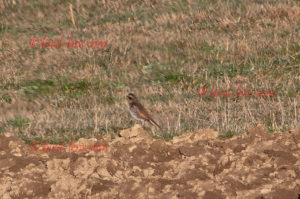 It was a bit of a sensation. A Dusky Thrush (Turdus eunomus) was sighted in a flock of Fieldfares (Turdus pilaris) in the middle of the Erzgebirge (Iron Mountains) near Stollberg, south-west of Chemnitz in south-eastern Germany. A Dusky Thrush discovered 4 years ago on Helgoland was the only report that I was able to discover for Germany on the Birder website ornitho.de. This means: a really rarity!

The decision to try the ornithologist’s luck despite the distance of 265 km was made after some hesitation on the4th day after discovery. The discoverer had initially mistaken the Dusky Thrush together with Fieldfares for a Redwing (Turdus iliacus) from a distance of 200 m in hazy weather. But then, due to the rust-red structure on the upper wing, he suspected the rare Dusky Thrush and after the photo and evaluation of it, the determination was secured.

Around 6:30 the sun sent the first tentative rays from the east over the gentle hills of the Erzgebirge at around 530m asl. The bird had been seen several times in the afternoon of the previous day in the wider area around the place of the first discovery. It was cold, the thermometer showed -3 ° C. A wonderful morning without wind and without clouds. The bird was of course not yet to be seen. In general, bird activity was still very restrained.

Some Common Starlings (Sturnus vulgaris) flew into the high tips of a birch at a small, artificially created pond. The Dusky Thrush was sighted here on Saturday. On the second reported day, the Dusky Thrush could first be seen high up in the top of a spruce tree, only to be spotted on a birch tree at around 9.15 a.m.

The chattering of a troop of Fieldfares made the birder sit up expectantly. Some Fieldfares landed in the high tops of the birch trees by the small, man-made pond. But not for long. The Fieldfares flew toward a nearby freshly plowed field that bordered a pasture. Here we were able to make the sensation perfect: A Dusky Thrush could be seen in the middle of the field with Common Starlings and Fieldfares. Whereby “together” does not necessarily mean spatial proximity, but rather an expression for “together in the field”. The bird did not stay between the Fieldfares, being more to one side, but quite close by. Unfortunately we had sidelights falling at an angle, which made observation not very worthwhile.

Suddenly Fieldfares flew up with the Starlings and we suspected that the Dusky Thrush was gone too. When we had placed ourselves in a sun-behind-the-back position and searched the field again with the spotting scopes, we could see the Dusky Thrush at the edge of the field very nicely in the morning light. A pleasure. Unfortunately only for a short time.

A little later, only Fieldfares with one Redwing and many starlings remained in the squad that the Dusky Thrush remained disappeared.

This experience is somewhat reminiscent of that of the Hume’s Warbler (Phylloscopus humei) in the northern Spreewald in early winter. There, on the first day, this rare leaf warbler could be located several times in the morning between 08:50 and 09:05 calling. Although it was approached up to approx. 10 to 15 meters, the bird was difficult to see in the willow bushes and reeds on the opposite side of the Skaby peat ditch, but it was surprisingly easy to observe. After 3 days, the Hume’s Warbler disappeared and was nowhere to be found.

Dusky Thrush is also a very rare vagrant in the UK. It resembles a Redwing in size and structure, while its powerful supercilium stripe is also strongly reminiscent of this species. The rest of its plumage, however, is generally quite pronounced, with variable but often distinctive chestnut tones in the upper parts and blackish markings, often in the form of chevrons, down the chest and flanks. The base color of belly, chest and flanks is white.

For bird-lens.com this observation is a nice addition to the Germany and Western Palearctic lists. So far I had only seen the Dusky Thrush in eastern China, where it appears quite often as a winter guest.

In order to cope with the growing demand for top images of the rarer species of the Palearctic, Bird-lens.com endeavors to further expand the range of images of birds in the Western Palearctic. Trips to nearby and remote locations to snap pictures of rare birds of the Western Palearctic have been very successful. The image of proof on the blog is just a first impression, which you can find very soon in the gallery in the “Picture Shop“. Just leave a message if bird-lens.com can serve with a picture.