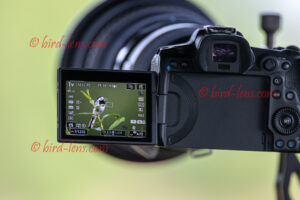 A White Wagtail (Motacilla alba) perches in the top of a Willow tree just in front of the bird watching tower. With a thick package in its beak consisting of small small Diptera such as Flies (Brachycera) and Mosquitoes (Nematocera), Caddisflies (Trichoptera) and small Dragonflies (Odonata), it waits patiently in front of the bird observation tower for the ornithologist to disappear. While the Barn Swallows (Hirundo rustica), which also breed in the tower, did not pay much attention to the (temporary) fellow visitor to the breeding site and kept flying in with food and nesting material, the White Wagtails were much more reserved, they didn’t even dare to go into the tower to feed the young. In the meantime, first one and then the other partner flew away again. Only to find themselves a few minutes later on the same branch tip – and sometimes also on the same leaf. I wanted to photograph this approach. I used the Canon EF 400mm f/2.8 IS II USM lens on a Canon EOS R 5.

Here is the “making of”.

First of all, you have to pair the Canon R5 with a laptop or a smartphone that is compatible with Bluetooth technology. I use a special app for this, which is Canon’s own product “Camera Connect”, which I installed on my laptop and on my smartphone a Samsung Galaxy S20 FE 5G.

With this you can

The first step is, to enable Bluetooth and Wi-Fi from the smartphone settings screen. Then there are some steps on the camera in the [Wireless Functions: Wireless Settings] chapter. The sub-chapter in the [Wireless functions] section labeled Bluetooth settings. must then be switched from the factory setting “Deactive” to “Active”. However, it is always set to “active” for me anyway, because I geotag the pictures with GPS information recorded by my smartphone so that I can later keep track of the locations I visited.

I can also do remote Live View recording. This enables recording while viewing a live image on the smartphone. But for me it was in this situation just a matter of not having to keep my finger on the camera shutter release all the time and to let my gaze wander into the immediate surroundings. The approach of a bird is usually announced by the fact that it starts somewhere. You are much more flexible with the remote triggering via the Bluetooth remote control. The image on the blog shows what it looks like.

What else is to be considered. On one hand, you should choose a short exposure time. In this case it was 1/1,250 sec which still enabled ASA 400 as the EF 400mm f/2.8 IS II USM is quite a fast lens. Furthermore, of course, the (mechanical) shutter was set to the highest release speed. Certainly the best method of choice for an approaching bird – if you don’t switch to the electronic shutter with its 20 frames/sec right away. Well, some don’t like the rolling shutter effect in the wings. But that’s a matter of opinion. What you should definitely do is set the auto focus to “Face + Tracking”. As you can see in the blog „White Wagtail with nestling food“ https://www.bird-lens.com/2022/07/27/white-wagtail-with-nestling-food/  the camera recognizes faces or the eyes of birds, among other things, very well and focuses on them. An AF point is displayed over each detected face, which is then tracked. If no face is detected at the moment – as in the case where the wagtail has not yet flown to the straw, the entire AF area is used for automatic AF point selection. It is only important in continuous AF (servo AF) to set the initial position for the servo AF to the expected approach position.

Normally I set it to “AF point selection in zone” by default (as already reported in the blog). To do this, the auto focus uses a larger area than the AF area. This makes focusing easier than with the “Face + Tracking”, but is counterproductive in this specific case, since there are other structures behind the blade, which would probably be used as the approach position, which of course should not be focused on in the meantime. It is also helpful to limit the distance on the EF 400mm f/2.8 IS II USM to just the close-up range. There is a corresponding switch on the lens, which of course must be changed back to standard after the recording session.

It should be noted that the auto power off is disabled during Bluetooth remote control. This and the continuous display mean that the battery consumption is not inconsiderable. During the on-site use, the battery was down to just over 30% in the 2 hours.