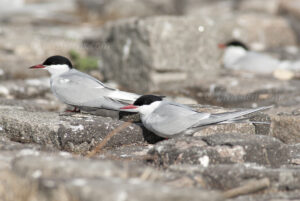 The Arctic Tern (Sterna paradisaea) is a real globetrotter. She is graceful in flight and downright dainty. This makes their worldwide occurrence all the more amazing. The birds breed around the Arctic Ocean to the northern tip of Greenland at almost 84°N and still comes regularly to breed on the North Sea coast at 54°N. Arctic terns then enjoy a second summer in their wintering grounds, the edges of the pack ice around Antarctica. This dispersal strategy is very strenuous in terms of migration route, as it stretches from northernmost land to southernmost open water. But it gives this bird more hours of daylight than any other bird species. The annual direct return flight is estimated at a good 40,000 kilometers. During these long journeys, most Arctic Terns are pelagic seabirds and are rarely seen from the shore. Scattered inland records from different parts of the world suggest that some individuals do make long migratory journeys over land. However, the proportion of Arctic Terns sighted over southern Germany is just 4% of all observations which are centered around the Northern Sea. Much remains to be learned about the Arctic Tern’s long journeys.

It is not uncommon for Arctic Terns to nest together with Common Terns (Sterna hirundo). In the southern part of the breeding range in the Atlantic Ocean, breeding populations of Arctic Terns mix with those of Common Terns quite frequently.

One of the best-known breeding grounds for both species is the lock of the Eider river near Tönning/Northern Friesland. Here Arctic Terns and Common Terns can be observed beautifully side by side from a short distance and can be photographed without disturbing the birds.

In her novella Migrations, Charlotte McConaghy describes an epic, moving story about the possibility of hope against all odds with Arctic Terns as the main actors. Contrary to what Charlotte McConaghy described in the novella, the Arctic Tern’s current status is arguably not yet under threat. However, it is also hardly known, mainly because of the remote nesting areas and the wide distribution of large parts of the breeding population. In fact, it is known that large declines have been reported in Greenland.

To meet the growing demand for top-of-the-line images of the rarer Palaearctic species, Bird-lens.com strives to expand the range of images of Western Palaearctic birds. Keeping the eyes open in the immediate vicinity is always crowned with beautiful impressions and some rare observations. The blog’s nice picture – shot at the best site in Germany for Tern-photograhy – is just a first impression, which you can find in the gallery in the “Picture Shop” very soon. Please leave a message if bird-lens.com can provide a picture.