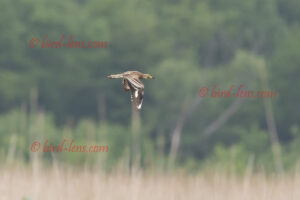 We walk along a narrow pebble beach in the middle of Montenegro’s Adriatic Sea. We’ve seen a lot of birds here already. Really remarkable this time is not only a Black-winged Stilt (Himantopus himantopus), which stands on the coarse gravel directly at the waterline, but also a Eurasian Thick-knee (Burhinus oedicnemus), which we observe a few times because – during walking along the beach – the bird  always falls a little further away on the beach . The Eurasian Thick-knee first flies south along the sea, before changing direction and flying north again. Suddenly he disappeared. When a jogger runs to the mouth of the swamp drain into the sea, the Eurasian Thick-knee flies up again and can be photographed beautifully over the reeds with the Dinaric coastal mountains in the background.

Buljarica is located in the central part of the Montenegrin coast, between two hills, Resovo brdo and Dubovica. It is the largest bay on the Montenegrin part of the Adriatic coast. Buljarica is actually a collection of houses, which of course has to give way to tourism and is adorned with some more or less ugly buildings. The way to the village, to the beach, is easy to find and then after about half a kilometer we are at the small swamp area described in some reports (42.190008, 18.972276). It is significantly warmer compared to our last visit a week ago and of course it is still overcast from the thunderstorm in the mountains. But it seems to be clearing up slowly. The swamp seems to be under heavy human pressure. A deposit already clearly shows that there is also to be built here. Luckily not much is going on at the beach now. The real crowds of tourists are yet to come. Only a few couples and families with children hang out on the pebbly beach, which is quite unattractive to sun-worshippers.

The whole Buljarica natural complex consists of a good 2 km long sandy beach, semi-naturally irrigated swamp area and hills and steep slopes of Paštro-vska gora in the hinterland. The mountainous slopes are part of Mount Sutorman. “Buljarica Marsh” is one of the few remaining brackish marsh complexes on the Adriatic coast. Unique are its relatively well-preserved ecosystems and a number of animal and plant species with a restricted distribution area and/or endangered animal and plant species that occur there either as breeders or during the migration season. A large part of Buljarica Bay is a wetland ecosystem. These types of habitats are rapidly disappearing on the Montenegrin coast, mainly due to the expansion of urban development. It is imperative to prevent a – looming – deterioration of the biodiversity, which the Bay of Buljarica with its sea zone preserves.

In the further course we also see a Corn Bunting (Miliaria calandra). Far away in the reeds, the Great Reed Warbler (Acrocephalus arundinaceus) can be heard. There is still nothing to be heard, let alone seen, of other reed warblers. The area is just amazingly deserted. The only exception is the Cetti’s Warbler (Cettia cetti), which is not a reed warbler either. Plenty of low-flying barn Barn Swallows (Hirundo rustica) are nice to see. Finally, I briefly hear the distinctive alarm call of the Little Bittern (Ixobrychus minutus)

To cope with the growing demand for top shots of the rarer species of the Palearctic Bird-Lens is keen to enrich the range of pictures of birds you can find in the western palearctic and beyond.  Trips to places like this one to capture images not only of rare birds of western palearctic were very successful. The nice image of the blog is only a first impression, what you will find in the gallery in the “Picture Shop” (http://www.bird-lens.com/zencardshop/) very soon. Just give bird-lens.com a message, if bird-lens.com could serve you with an image needed before the new pictures are online.