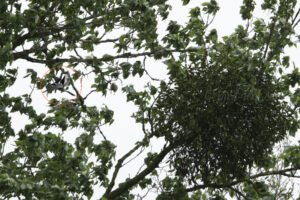 Sometimes you will become aware of the Northern Shrike or Great Gray Shrike (Lanius excubitor) in or especially before the breeding season through its musical talent. But that is rare. Because his song consists of short, repeated verses, which are interrupted by longer silent intervals. Normally it is introduced with “trrr” or “prrr” notes, which then turns into a rather rough, clattering “song” like “tülick, tlüch, chlü, chluip, trü”. This is followed by a nasal begging “kwää”. In the case of a recent observation, however, that was not necessary, because in a well-known Lanius excubitor-area a Northern Shrike with a veritable mouse in its bill flew at a sparsely leafy alder and then suddenly disappeared into a side tree. A little later we could see a flying-out Shrike in a treetop.

So we had obviously found this bird near its nest. Now I wanted to know more about it. So the next day I positioned myself on a high stand and with the help of the spotting scope I was able to take a closer look at the row of trees opposite. After a short time, a Northern Shrike actually came flying in and headed for a large Medlar (Mespilus germanica) at about 3/4 height of a tall and already leafy Poplar (Populus sp.). The nest could not be seen in the Medlar itself. But obviously the nest was in the middle. Two adult birds always headed for the nest, sometimes paused below the nest or could only be guessed by the black-white-gray tail feathers that peeked out from between the Medlars twigs.

Finding a Northern Shrike nest is quite an art. The bird lays its eggs from late March to late May in central Europe. There is usually only one brood, very rarely two. The Northern Shrike is strictly territorial and does not tolerate any conspecifics in the area. The nest is built by both sexes and is described as well-structured. It consists of a loose foundation of twigs, grass, roots – often with a high proportion of green plants – and is then lined with roots, feathers and hair. As in the case described above, the nest location is generally high above the ground in a fork or on the side branch of a tree. The preferred tree species are mainly Pine (Pinus sp.) or poplar. However, the nest can sometimes be in a dense shrub and then is located on a much lower height. But I haven’t seen that before. The incubation period is 14–19 days, mostly 15–17 days. The subsequent nestling period is another 14-21 days, usually 15-19 days. Despite its rough behaviour, the Northern Shrike is not protected per se. A well-hidden nest is therefore helpful for the successful rearing of the young. Nests are repeatedly parasitized by the Common Cuckoo (Cuculus canorus), which was also observed flying several times on the occasion described above.

In order to be able to satisfy the growing demand for top shots of the rarer species of the Palearctic, bird-lens.com explored the home ground and has made targeted trips to the most beautiful natural landscapes of the world. This was done to be able to take excellent photos of the birds of the Western Palearctic. The yield of pictures of rare Western Palearctic birds is very good. The picture of proof you see in the blog is only a first impression, what you will find very soon behind the “Picture Shop” tab. Just let bird-lens.com know if you need a picture of a bird species before new pictures are online