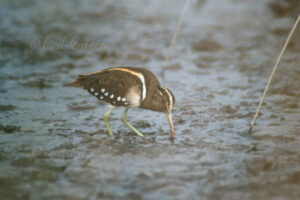 An American Painted-snipe (Rostratula semicollaris) poking in the moist soil in the most beautiful morning light in early March 2000. What a picture. It looks much smaller than the Common Snipe (Gallinago gallinago). The Painted-Snipe is foraging in shallow water at the edge of a sedge stand, picking up prey with the semicircular movement of its bill. One gets the impression that the bird can open the bill while it´s tip remains submerged in the mud.

Finally, I see it silently flying up from the reeds. It shows an almost bat-like flight. I do not hear a dull, hoarse sound, as it is occasionally described for flight. In the meantime something has been happen with the scientific name. It is now: Nycticryphes semicollaris.

Driving to my favorite spot on an abandoned farm, I have just photographed a gliding Long-winged Harrier (Circus buffoni) in the best evening light. A couple of Monk Parakeet (Myiopsitta monachus) squabbling on a rusty barbed wire. From an old concrete bridge Red Shoveler (Anas platalea) Silver Teal (Anas versicolor), Speckled Teal (Anas flavirostris), Brown Pintail (Anas georgica), Cinnamon Teal (Anas cyanoptera), of course Black-necked Stilt (Himantopus mexicanus) and lots of rails and coots as well as a Pied-billed Grebe (Podilymbus podiceps) and White-tufted Grebe (Rollandia rolland) can be seen. The highlight, however, is one or two individuals of the American Painted-snipe (or South American Painted-snipe, as it is also called) foraging in the most beautiful morning light along a reed fringe.

The American Painted-snipe is described as shy and largely nocturnal. When conditions are right – by which I assume they mean food availability – they can be found in small groups. I was lucky.

This South American snipe is little known and is found only in the southern part of South America. American Painted-snipe prefer short, grassy wetlands with taller, emergent vegetation nearby. Because they tend to prefer shallow wetlands, their habitat is short-lived, and these wading birds disperse when conditions become too dry. Although the Painted-Snipes oft he world do not share the same genus anymore, it is remarkable, that in the Old World resident member of this family, the sex role is reversed, and some information suggests that this may also be the case for this species. However, the breeding strategy has yet to be confirmed.

I photograph the two South American Painted Snipe individuals from my car with the Nikon Nikkor AF-I 4.0/ 600 on a Nikon F 5 at 1/60.

What does bother me in 2021 – more than 20 years later – are the then not so perceived pitfalls of the analog world, which was largely based on slides for nature photographers. I have seen that in photos that I fortunately took alternately with the different Nikon F5 – and thus with different films. The results after more than 20 years turn out to be markedly different in color tone. While one film has a distinct blue-violet cast, the other film is beautifully neutral in preservation. The point is, that both films are Fuji Sensia II RA 666 with 100 ASA. That shouldn’t really exist. Maybe a different development in the laboratory?

Estancia Palenque, actually an ex-Estancia el Palenque, is located about 10 km east of Gral. Lavalle in the federal state of Buenos Aires in Argentina. This estancia – if it still exists – is worth every visit. It is also not so far away from the capital of Argentina, Buenos Aires, that it would be impossible to visit it during a vacation in Argentina. The estancia is a real bird paradise. At least I found birds there that I didn’t see in Campo del Tuyu (nearby) and also in the national park El Palmar in Entre Rios or even at the Parana. At several beautiful sites you can observe among other Red Shouveler, Silver Teal, Speckled Teal, Brown Pintail, Cinnamon Teal, Pied-billed Grebe and White-tuffed Grebe.

Brown Pintail seem to be the most numerous, that along with the one or the other Rosy-billed Pochard (Netta peposaca). Standing on the reed edge you might notice a White-faced Ibis (Plegadis chihi) when it is standing nicely up to its knees in shallow water. Large flocks of Brown-hooded Gull (Larus maculipennis) are frequently fliying up in a most beautiful morning light.

Bird-lens is primarily a website designed to meet the growing demand for high quality photographs of the birds of the Western Palearctic. In order to satisfy the demand for top-quality photographs of rare bird species, Bird-Lens.com has also made targeted trips to distant places such as Asia, Africa and South America. All this in order to be able to take excellent photos of birds. The yield of pictures not only of rare Western Palearctic birds is very good. The beautiful picture of the blog is only a first impression, what you can find in behind the tab “Picture-Shop” very soon. Just leave a message if bird-lens.com can serve with a picture.