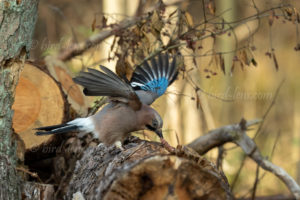 Since October I have had a feeding place for the birds in my garden. Every now and then Eurasian Jays (Garrulus glandarius) hang around the feeding place. Usually they rarely comes within photo shooting range. During winter feeding, however, it also shows up more frequently from a shorter distance. In our latitudes it is the most colorful raven bird with the Eurasian Magpie (Pica pica). Usually the Jay is a cautious fellow which is only occasionally seen up close. The Jays (Garrulinae) belong to the group of songbirds, which one – if you can hear their voice – is not necessarily ready to believe. Its “rattling” however convincingly conveys its relationship to the Real Crows (Corvinae). The Jays (Garrulinae) are generally more colorful and varied in color. The non-ornithologist will be surprised that both groups are included in the songbirds. And yet the jay is not untalented as a singer and can even imitate other species of birds.

When it comes to food choices, the jays are quite versatile and do not shy away from eating young birds and clutches in spring and summer. In autumn and winter, however, it is berries, nuts and seeds that disappear in the robust beak of this omnivore. In any case, the Jay can be noticed in front of my camera every winter. It is possible that the bird has also filled its crop with nuts in order to then bury them for later consumption. This is, because the Jay is a master at keeping stocks. It also likes to help himself from his fellow species. Scientists wanted to know how the birds can spatially memorize the food hiding places of their conspecifics. A bird was given the opportunity to hide its food in one of several boxes. In the adjoining test cage, a conspecific was able to follow the events through a mixture of acoustic and optical signals. The results showed that the “work” of the Jays predators is made easier by good observation and listening. Those birds that had the opportunity to hear their conspecifics burying food, but not to see them, had a greater search success than would have been the case under random conditions. The containers with the respective substrate (gravel and sand cause different noises when digging in) were more or less targeted. However, the search efficiency left a lot to be desired. The birds, which could see and hear their feathered comrades while hiding their food, are different. With them, both the search success and the search efficiency were significantly better. It looked bad for the group of non-listeners and non-viewers. There was no significant success in finding the food hiding places for them.

In view of the jays ‘ingenious methods of spying out and plundering their conspecifics’ foraging hiding places, it is not surprising that countermeasures are also taken. Logically, these consist in the fact that a bird only creates its food hiding place out of sight and hearing range of conspecifics.