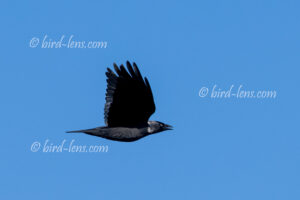 Heavy migration can be observed on the side facing the Caspian sea at the Besh Barmag Bottleneck. Between Rooks (Corvus frugilegus) there are also flocks of Eurasian Jackdaws of the eastern subspecies. Corvus monedula soemmerringii occurs from eastern Europe through Iran to northwestern India. I had seen this race of Eurasian Jackdaws before in northern Bulgaria at the beginning of February. Here on the Besh Barmag Bottleneck, the light-colored ruffs really stand out in the sunlight and form a nice contrast to the black, partly mottled plumage. The greenish-bright eye stands out, too. Otherwise many other songbirds are on migration as well now. I photograph a Crested Lark (Galerida cristata) in a flock. The characteristic calls can also be heard again and again elsewhere in the area. There are also numerous Chaffinches (Fringilla coelebs). Rooks and Hooded Crows (Corvus cornix) pass by in small flocks and are quite easy to photograph.

A short trip to Azerbaijan in early November, like a Black Sea holiday in Turkey in September, was dedicated to bird migration along the respective sea coasts.

This time it should go to a spot that has a very good ring to it as a besh barmag with birders. The site is a bird watcher’s paradise, especially in spring and autumn when up to 200,000 birds can pass by daily.

Migratory birds are known to avoid topographical barriers. At these barriers, local environmental conditions often lead to high concentrations of migratory birds at certain corridors or points, commonly referred to as ‘bottlenecks’. The Greater Caucasus and the Caspian Sea are such barriers to migratory birds in Southwest Asia. A narrow coastal plain between the Greater Caucasus and the Caspian Sea in Azerbaijan, the Besh Barmag Bottleneck – we have verified – offers excellent conditions for studying bird migration in the eastern western Palearctic.

In the area around a prominent rock called the Besh Barmag, it is possible to see over 100 or more species in a single day. These include a variety of raptors as well as thousands of ducks, herons, terns, gulls and shorebirds migrating along the coast whilst some very exciting species regularly stop in the area. However, the majority of birds are passerines. Tens of thousands of larks, finches, pipits, swallows and much more migrate south on a good late autumn day. Well over 100,000 starlings were counted in one day. Besh Barmag is located about 100 km north of Baku and can be reached in about 1.5 hours on partly good and partly very bad roads.