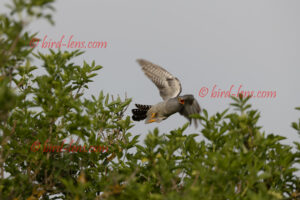 As soon as I arrived at a hide, I hear the calls of at least 5 Common Cuckoos (Cuculus canorus). You don’t have to do much to get a individual in front of the lens. The elemantary drive of the birds to set up or maintain a territory is basically sufficient. Nevertheless, I wanted to help a little and lure a Common Cuckoo with cuckoo calls from the tape to the elder bush in front of a pulpit. Contrary to what is commonly assumed, the typical “cuckoo, cuckoo” is more the singing. On the other hand, a choppy giggling and clearly audible hissing indicate that a territory is to be defended or a supposed rival is to be impressed. I stood in a covered hunting booth with an Elderberry (Sambucus nigra) eight meters away. I put the loudspeaker for the MP-3 player on a branch of the elderberry. I am connected quickly with Bluetooth and can start and end the calls via the MP-3 player.

Around 6:00 a.m. the time has come. After only a short time the lure calls come back. In the field of view of one of the slits I see the Common Cuckoo at a distance of only 20 meters. For minutes he and other conspecifics responded to the calls of the MP-3 player. Finally it flies over the Elderberry several times and sits down on the bush. A choppy giggling and clearly audible hissing indicated that he wants to impress the supposed rival. Suddenly, as if enchanted, he suddenly sits on the Elderberry tree, turns back and forth, twitches his tail every second and bends his head down in the direction of the loudspeaker. Then again he scans the skies for competitors. Suddenly it spins at incredible speed, widens its beak to reveal its red throat and then flies over the bush at high speed to chase another Common Cuckoo that is trying to compete for its territory.