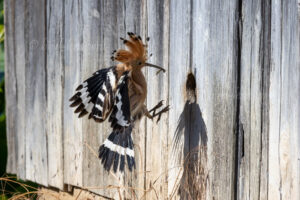 I already discussed shortly the limits and possibilities of remote photography at the Hoopoe’s nest in the blog “How to photograph Hoopoes? Part II” described. At the beginning of June the Eurasian Hoopoes (Upupa epops) are so far advanced that 3 young are waiting begging for food in the nest. Whether you photograph the approaching Eurasian Hoopoes from the car or from a camouflage tent on the nest should be found out in your own field test.

I would rather advise against using teleconverters. What is important is patience, time and the willingness to work with different apertures, shutter speeds and ASA settings in order to achieve the best possible results. So please don’t just work with an open aperture to achieve super-short exposure times to avoid motion blur.

Pictures under 1/2,500 sec still show a slight motion blur. I had set the aperture in manual mode up to the top aperture “8”. Consequently, you should try to work in sunshine and with a higher ASA value in order to achieve these short shutter speeds with small apertures in combination. In my case up to ASA 5,000 was needed. Depending on the camera, the resulting noise is still acceptable and can also be mitigated in Adobe Photoshop/Lightroom if necessary. The Canon EOS 1 DX Mark III tolerates ASA 5,000 quite well, while the sensor of the Canon EOS R 5 already produces significant noise at this sensitivity.

You should definitely make use of the electronic shutter option. Not only does this allow you to shoot without shutter noise – which might not bother the Eurasian Hoopoes at all – but the camera then always takes about 20 shots/sec at a fast speed. on. Mechanically it is significantly less. And since, according to the manual, recording with the mechanical shutter is recommended when the aperture of a bright lens is wide open and the aperture is – at least slightly – closed for reasons of depth of field alone, this is not a problem either.

Using the maximum series speed on the camera is important. This was particularly necessary when the Eurasian Hoopoe approached the breeding tube so that various flight movements could be photographed. Nevertheless, one should not overdo it. Even if a series of up to 12 images (with a total sequence of 50 images – i.e. feeding and take-off included) was triggered during an approach, it depends very much on where the initial focus is placed. If this is already well preset, 5 images are sometimes the proud result. Some pictures at the beginning showed the shadow of the approaching Eurasian Hoopoe on the wooden wall and the last pictures always showed the Eurasian Hoopoe already clinging to the nest hole.

It is important to adjust the settings mentioned in the blog Nature photography with the Canon R 5: Settings Autofocus menu EOS R 5 (AF) to the shooting situation. The AF mode is set to “SERVO AF”. The AF method defaults to Zone AF (later to face detection and eye tracking). Eye recognition is one of the particular strengths of the EOS R5.

Another challenge of the Hoopoe photography these days in these latitudes was the weather, which changed several times a day from rain to very cloudy to blazing sun. Cloudy means high ISO values ​​with the necessary shutter speeds. Sun up to what feels like 50° degrees heat in the tent.

The recording shown here was taken from the car without much effort. The Eurasian Hoopoes did not place an exaggerated value on camouflage. Who want to see more, might have a look in gallery with the programmatic title Hoopoes at Kaiserstuhl.

The last few days have been a real Hoopoe photo tour. It is always a unique experience to observe and photograph these impressive birds. I am lucky enough to know and be able to visit a nature garden lover and Hoopoe expert. He has been committed to the well-being of these great birds for years. Through a lot of consistent work over the past few decades, he has managed to increase the breeding success of the Eurasian Hoopoe in the garden year after year. Only through such nature lovers is it possible that nature can be preserved in its full beauty for the future.