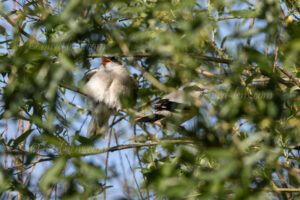 End of May. Loud, plaintive shouts echo from a willow bush on the edge of a wetland directly on a canalised lowland river in southern Brandenburg. Small, short-tailed, high-contrast black and white birds slip between leafes and branches calling loudly. It quickly turns out. They are young Great Grey Shrike or Great Gray Shrike (Lanius excubitor) that are now found below a Great Grey Shrike nest identified already in mid-May.

The incubation period of Great Grey Shrikes is 14–19 days, usually 15–17 days. The subsequent nestling period is another 14-21 days. The so-called lead time, the time in which the young are led outside the nest and then also are fed, then takes a while.

It was noticeable that the young gray shrikes, three in number, liked to stay together in the dense willow bushes; sometimes very close on the same branch. Sometimes they kept quite for a while; then one had the impression that they had changed location. But then they shouted intensely and begged provisionally with violent wing flapping and beaking. Major changes of location were not observed during the entire period. Even at this early stage in their lives, the young Great Grey Shrikes made sure they were well covered. This was especially true when feeding. It seemed as if the parents were luring the young deeper into cover for feeding. The prey was handed over – as can be observed over a period of approx. 2 hours – extremely quickly and probably only to one young animal at a time.

Only in one occasion, when a young bird returned to its siblings in the willow bush after a short excursion to the nest tree, this young bird could be observed and also photographed in the open for a short time on a branch at the edge.

I was also able to convince myself of the almost fierce defense when a Black Kite (Milvus migrans) patrolled the poplars (Populus sp.) that accompany the river. When the raptor appeared at the height of the willow bushes, it was vehemently attacked from above by an adult Great Grey Shrike in bomb diving manner.

The family was obviously staying near the nest one already posted on the blog about the nest of the Great Grey Shrike. When I discovered it at the time, I positioned myself on a hunter lookout  and with the help of a spotting scope was able to take a closer look at a row of trees. Due to the incomming flights oft he Great Grey Shrikes, the nest of the Shrikes could at least be assumed to be in the middle of a large Medlar (Mespilus germanica) at about 3/4 height of a tall and already leafy poplar. The nest could not be seen in the medlar itself. But obviously the nest was in the middle of it. Again and again two adult birds headed for the nest, sometimes paused below the nest or could only be guessed by the black-white-gray tail feathers that peeked out between the medlars.

In order to be able to satisfy the growing demand for top shots of the rarer species of the Palearctic, bird-lens.com explored the home ground and has made targeted trips to the most beautiful natural landscapes of the world. This was done to be able to take excellent photos of the birds of the Western Palearctic. The yield of pictures of rare Western Palearctic birds is very good. This nice picture you see in the blog is only a first impression, what you will find very soon behind the “Picture Shop” tab. Just let bird-lens.com know if you need a picture of a bird species before new pictures are online