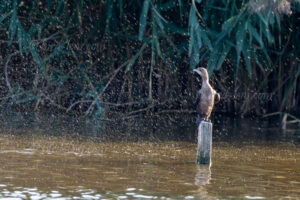 „The clouds offer an almost fantastic sight; domes rise from their surface and slowly reshape themselves into columns several meters high, swaying back and forth in the light summer wind, thinning out to spread out above like pine crowns, and finally dissolving to make way for other columns. The apparition lasts until nightfall; the twitching clouds glow red-gold in the evening sun and gradually disappear into the increasing darkness after sunset, while the upper part of the columns, hit by the last rays, still stands out shining gold against the bright evening sky. The cloud carpet continuously sends up new columns and is in continuous, undulating motion like a sea moved by a mighty swell”.

The Swedish naturalist Wesenberg-Lund impressively describes this natural phenomenon in which this clade of insects (Chironomidae), also known as true midges, are a family of two-winged insects (Diptera), play the main role, in his well-known publication “Biology of Freshwater Insects” from 1943 from the Swedish Lake Esrom.

A warm summer day will soon come to an end. For the second time I went to a fishing water at a drainage ditch north of Genshagen, a district of Ludwigsfelde in southern Brandenburg. The area is only 30 kilometers away from downtown Berlin, den German capital.

When I arrived at the fishing water in the afternoon, a Pygmy Cormorant (Phalacrocorax pygmeus), which had been reported for some time, had probably been sitting on a low wooden post for some time and was preening itself extensively. The farmers were harvesting in the surrounding area. Thus the air was filled with chaff, which in the backlight produced a peculiar curtain – reminiscent of snow.

Suddenly the “curtain” of whirring and flying particles increased. With astonishment I realize to witness large dancing swarms of chironomids, also known as dancing mosquitoes or swarming mosquitoes. In the process, the male chironomids are always ascending and descending. The species-specific frequency of wing beat results in a buzzing sound that attracts females of the same species. These are seized in flight and mated. From a distance, these dancing swarms can easily look like columns of smoke, and it has happened that firefighters have been called out because of such giant swarms. Certain weather phenomena, such as sudden jumps in temperature or thunderstorm air, can abruptly trigger a mass hatch of certain species, so that sometimes entire riparian zones are enveloped in clouds of swarming true midges.

In between, low over the water flitted dragonflies. What an impressive picture!

A Pygmy Cormorant in Germany, is not really a sensation but also not common. First the Pygmy Cormorant was sighted on the reedy fishing water, what is described above. Later it changed in the meantime to the Nuthegraben, which comes from the direction of Diedersdorf.

In order to satisfy the growing demand for top shots of the rarer species of the Palearctic, bird-lens.com has made targeted trips to the most beautiful natural landscapes of Brandenburg or Berlin, but also to distant places. All this in order to be able to take excellent photos of the birds of the Western Palearctic. The yield of pictures even of rare Western Palearctic birds is very good. The beautiful picture you see in the blog is just a first impression, what you will find in behind the tab “Picture Shop” very soon. Just let bird-lens.com know if you need the picture of a bird species before new pictures are online.