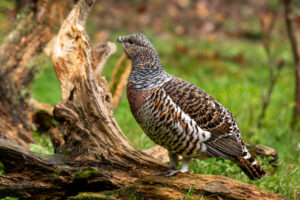 Old and weakened trees have not been felled and removed from the forests for years, but remain there until they are knocked over by the wind or pushed down by the snow. Insects such as the bark beetle, which are seen as pests in commercial forests, are allowed to make their natural contribution to forest development here. The forests are changing with tremendous dynamism, becoming wilder, more diverse and more and more attractive not only for nature lovers. Another beneficiary is the capercaillie, which occurs in mature conifer forests with diverse species composition and a relatively open canopy structure.

But nevertheless, to spot a Western Capercaillie (Tetrao urogallus) in the wild, even in top habitat, it really takes luck. In the wildlife enclosure area near Neuschönau in the Bavarian Forest National Park the chances are much better and you can take really beautiful and impressive images with your camera.

The way from the parking lot at the Neuschönau wildlife enclosure led us straight to the first of the accessible aviaries. Here the visitor stands in the shade and looks between generously dimensioned wires that are elastically attached to springs at a very natural-looking area made of young beech, spruce and scrub. The eye falls on an almost motionless hen of the capercaillie, which has positioned itself very picturesquely on an already rotted tree root.

The hen twists and turns without haste and finally descends from the roots to peck in the lush grass. In the meantime, a male capercaillie has not moved from its high branch in the corner of the aviary. The male bird lets the visitors come and go without moving itself. Since the nature lover is only separated from the birds by the wires, you can get really close to them. In my opinion, the distance between the visitor area and the bird is a maximum of 15, sometimes not more than 5 meters.

Even if photography in an outdoor enclosure is not my preferred hobby, I can’t resist the free-standing Capercaillie. Nevertheless, it should of course be noted that the cage is completely covered with wire mesh. The unnatural-looking, even structure of the mesh can be neglected in the images either through a corresponding aperture (here aperture 2.8 of a Canon 2.8 400mm L IS II on a Canon EOS 5 D Mark III) or by post-processing in Photoshop 2021. The first way to literally “hide” disturbing objects in the picture is to use an open aperture (as low as possible f-number) and the resulting shallow depth of field to focus on the Capercaillie and thus all disturbing elements into the to move blurred areas of the image. The fact that a wire mesh would be seen in the background in one picture is concealed quite well by the shallow depth of field of the other picture. 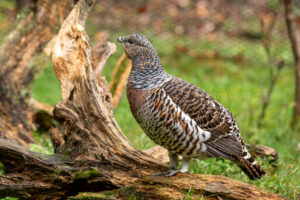 In the wildlife enclosure in Neuschönau (which is practically the shop window of the Bavarian Forest National Park) you can take really beautiful and impressive pictures. It is also often not possible to recognize that it is a (free) enclosure. And both the perspectives and especially the motifs are really great. The wildlife enclosure in the national park center below the Lusen summit has an area of 200 ha. The dedicated enclosure area is approx. 40 hectares. 45 native animal species live in their natural environment in the spacious enclosures and large aviaries of the area. Birds in the wildlife enclosure include the Boreal Owl or Tengmalm´s Owl (Aegolius funereus), the Long-eared Owl (Asio otus), the Ural Owl (Strix uralensis), the Pygmy Owl (Glaucidium passerinum) and the Three-toed Woodpecker (Picoides tridactylus), the Capercaillie and (until recently) the Hazel Grouse (Bonasa bonasia).

In order to satisfy the growing demand for top shots of the rarer bird species of the Palearctic, bird-lens.com has made targeted trips to the most beautiful natural landscapes of Brandenburg or Berlin but also to distant places. All this in order to be able to take excellent photos of the birds of the Western Palearctic. The yield of pictures also of rare Western Palearctic birds is very good. The nice picture you see in the blog is just a first impression, what you will find in behind the tab “Picture Shop” very soon. Just let bird-lens.com know if you need the picture of a bird species before new pictures are online.