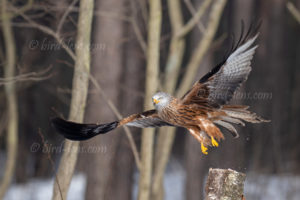 That has been, without a doubt, a remarkable bird-in-snow week in February. One of the harshest cold spells in the last ten years hit a large area in north-western Europe in the first half of February and resulted, among other things, in a invasion of Eurasian Woodcocks (Scolopax rusticola) in search of non-frozen places to feed. In Denmark, Eurasian Woodcocks by the dozen were found looking for worms in gardens and ditches. But other birds could also be observed extremely well and – with luck – photographed for example at feeding sites. This is also the case with the Red Kite (Milvus milvus), which appeared at a site with a bait after an elegant flight through the pine forest.

While there have been a lot of great shots of this bird species on a field in the snow lately in winter, this flight shot is really fascinating. Perfect winter light produced a beautiful color rendering of the bird from below, with the sun probably being reflected from the lying snow. A shutter speed of 1/2000 sec. has captured this fast-flying bird perfectly and created a sharp image in a brilliant pose, which makes it possible to admire the beautiful red and white plumage of the Red Kite in all its beauty.

Now, only one other bird with a raptor flight is missing now. This should be a Northern Shrike (Lanius excubitor) in its winter habitat. This bird can be seen in the south of Brandenburg for a good 4 – 5 months in a few years. Luck should be there too.