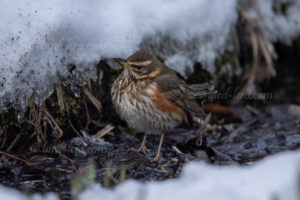 The snow is already high and flakes are still falling from the icy-cold sky in eastern Germany. Only the flowing waters still have open water. A refuge not only for water birds. Other surface waters in the area have long been covered by a thick layer of ice. The Mallards (Anas platyrhynchos) do not seem to mind the winter weather; as long as the little stream in southern Brandenburg is still open. For a Redwing (Turdus iliacus) the border area between bank and water has become a vital food space. The Redwing has just flown out of an overgrown garden to explore the trench of the stream. Quickly and without fear of humans, the Redwing begins to conquer the steep bank areas that lie in the transition zone between deep snow and water. It firmly hits the overhanging snow and tries to find prey behind it; insects that are frozen here, perhaps also a berry of a rose hip that was left behind. It is not recognizably successful during the observation period, but the Redwing does not leave a radius of approx. 5 meters either. The vacated position could be productive after all.

For many birds, low temperatures and high-lying snow mean that they cannot find food in familiar ways. Unusual behavior can also be observed in high snow conditions. When there is snow, the Black Alder (Alnus glutinosa) throws down its seeds. Black globules lie in the snow. Almost like poppy seeds. On the ground, Chaffinches (Fringilla coelebs) and Yellowhammer (Emberiza citrinella) are happy about the extra bread and busily peck around to pick up the seeds.

Interesting observations can also be made in the nearby cemetery in winter. Thrushes, especially Blackbirds (Turdus merula), can be found here over the winter. The Blackbirds share a roost here, as does the Fieldfare (Turdus pilaris). Blackbirds and Fieldfares have a hard time in Central Europe in long winters. Both thrushes like to eat the fruits of ivy when the snow is high.

Goldcrests (Regulus regulus) are particularly beautiful to see in winter. At the edge of the forest, a small group can quickly be seen in the snow, defying the cold. When the wings flutter, the snow throws away that it is just such a bliss. The pictures in the gallery of the birds also called Kinglets in snow are very impressive.