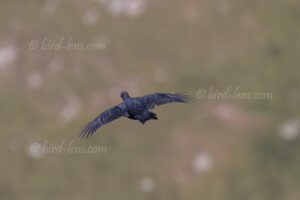 Suddenly a male Caucasian Grouse (Tetrao mlokosiewiczi) flies up at our feet. The Caucasian Grouse lifts itself out of the rhododendron with powerful wing beats but without any audible noise, gaining only slightly in height and then gliding down the sparsely overgrown slope with wings held horizontally and wing tips hanging down. The first Caucasian Grouse is followed by 7 others; all males. The birds fly in formation down the slope for quite a while, allowing us to see the birds extensively. We are now at 2,750 m above sea level. In the further course we flush 2 more males of the Caucasian Grouse. The black bird with the pink eye area flies beautifully down the slope in front of the alpine landscape changing in different shades of green. The hanging, curled-in tail tips are just as good to see as the white undercovers.

The track climbs steeply up the mountain above the village of Sivrikaya. It leads us to an abandoned village, which is actually deserted this time. We park the SUV in the upper part of the village. At 12°C it is still fresh in the morning; a light breeze is blowing. A fantastic blue sky greet us. Everything in and above the village is heavily overgrown with eutrophic plants. Above the village we can already see the mountain slopes with their carpets of rhododendrons, which we are aiming for.

We go up the mountain with our trekking poles just behind the abandoned village. A path is not recognizable, but the vegetation consists largely of an alpine meadow, which can be crossed easily. The flowers alone are worth the walk. We walk exactly as described on the map by Tjeerd Burger in the trip report about Turkey, 15 July- 4 August 2013. First it goes well up the slopes above the village. The rhododendrons greet us from afar. I stop every now and then to scan the slopes but nothing is happening. No other birds either. After a while I get a little nervous as to whether we’re really in the right place. But we didn’t find any birds at the other places that are otherwise described in trip reports. Perhaps the birds have disappeared deep into the rhododendrons.

We are finally at 2,700 m above sea level. A whole carpet of rhododendrons stretches along the mountainside. Most is still in shadows. We must now begin to walk offset parallel to the slope. The slope has its incline, but it doesn’t appear to be that steep. However, if you then walk between or on dwarf rhododendrons, you realize how strenuous it is to cross such a field. But when we got through the first rhododendron field, we still haven’t seen any bird. We are now at 2,730m above sea level.

I notice that I keep drifting upwards. Now there is another rhododendron field on an even steeper slope ahead of us. Here the rhododendron is taller, almost knee high. This will make walking even more difficult. A little rest before the next field. We take the first steps forward and suddenly a male Caucasian Grouse flies up in front of our feet. The first Caucasian Grouse is followed by 7 others; all males. The birds fly down the slope for quite a while so we can see the birds properly. Great, we are now at 2,750 m above sea level. Unfortunately I didn’t take the camera out of the backpack. That won’t happen to me in the future. We still have most of the rhododendron field ahead of us. We finally managed to nail down this difficult target species. What a relief! In the further course we scare up 2 more males of the Caucasian Grouse. Now I’m faster with the camera too. The black birds fly beautifully down the slope in front of the alpine landscape. I can see the hanging, twisted tail tips just as well as the white undercovers. But it’s not enough for more than take-off pictures of the Caucasian Grouses. The question is: where are the females?

The landscape of north-east Turkey is breathtaking. Alpine peaks, mountain forests and alpine meadows alternate. A historic Silk Road crossing once ran nearby over the Ovit Pass in the Kaçkar Mountains. This unique, mountainous part of the Turkish Black Sea coast has a lack of large hotels, noisy crowds or developed ski slopes in addition to nature.

The area around Sivrikaya in the Pontic Mountains of Rize province is home to two very special species. Now, only the Caspian Snowcock (Tetraogallus caspius) is missing.