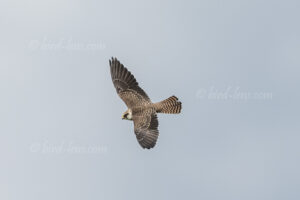 A violent thunderstorm announces itself over the meadows south of Saarmund in the Nuthe-Nieplitz-Niederung. Four individuals of the Red-footed Falcon (Falco vespertinus) fly together with Common Kestrel (Falco tinnunculus) to catch prey in the high grass of the meadows. The Common Kestrel do not appear to be affected by the presence of the other falcon species. The report about four Red-footed Falcons, which were sitting at the same time on fence posts and then later could be observed hovering across meadows together with Common Kestrels, came in at www.ornitho.de, the german birders portal, at noon. Already on Saturday, September 17th, a sighting appeared on this website.

Their prey seems to be mostly grasshoppers. Hunting flights west of the Nuthe, mainly north of the Gröben – Tremsdorf road, but also partly south of it. Loosely associated with kestrels, making species identification difficult in more distant birds. Attention: Nuthe Bridge cannot be crossed by car from the north.

The Red-footed Falcon’s manner of hovering is often cited as being useful for species identification. In the case of the two young Red-footed Falcons from August 2019 in Niederen Fläming, this was also quite easy to observe. The Red-footed Falcon is generally intermediate between the Common Kestrel and the Hobby (Falco subbuteo) in its graceful and agile flight behavior and can at times display characteristics of both falcons. The Red-footed Falcon has a fast and agile cross-country flight on retracted wings, often raising its fangs at the last moment to catch prey (thus like a European Hobby); but it also hunts from a perch or hovers like a kestrel.

This time, however, Red-footed Falcons and Common Kestrels were out and about in an almost similar hunting manner. Extensive hovering between 10 and 40 meters in height was seen in both Red-footed Falcons and Common Kestrels in a stiff, regular flapping of wings. This effect is enhanced by both comparatively long tails. A Hobby-like prey flight was not observed. The similarity went so far that in some cases the species-ID was only recognized when looking through the camera/lens whether it was actually a Red-footed Falcon being photographed. Possibly the gusty freshening wind in the run-up to an approaching thunderstorm was particularly useful for the hovering flight.

To meet the growing demand for top-of-the-line images of the rarer Palaearctic species, Bird-lens.com strives to expand the range of images of Western Palaearctic birds. Trips to many locations to take pictures of rare western Palearctic birds have been very successful. This nice picture of the blog is just a first impression of what you can in the “Picture Shop” very soon. Please leave a message if bird-lens.com can provide a picture.