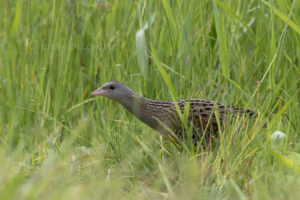 Early morning in the Ujście Warty National Park, only 80 kilometers away from Berlin. This is the perfect hour and the perfect place to find and photograph the Corn Crake (Crex crex). And soon I hear the calls of a Corn Crake (Crex crex) in the background of a densely overgrown meadow not far from the Warta river. I play his “song” from the tape. Although I had the impression that the Corn Crake had stayed far in the area before, it didn’t take long before the bird suddenly seemed to be standing right next to me with an impressive sound volume and a little later stepped out of a thicket of willows.

I shoot from the car with the Canon EF 400mm f/2.8 IS II USM lens on a Canon EOS R 5 and manage to snap a few photos of the free-standing bird before it disappears back into the thicket. I decide to use the ECKLASPHERE tripod from Eckla to get a completely different perspective. I have to lie down on the floor to do this. An old mat serves as a base.

With the ECKLASPHERE, the photographer has the option of optimal 3-dimensional tracking (quite like with a bean bag but much more comfortable) without having to forego the simultaneous operation of the lens. The ECKLASPHERE is therefore perfect if you want to “go deep”. It can be attached directly to the lens base or to the adapter plates of quick-release clutches.

Even so, taking photos is not that easy despite the foldable display of the Canon EOS R 5. I put a Bluetooth speaker at the side of the dirt track, right where the tall grass ends and wait. Suddenly, without a blade of grass having moved, the bird is there. This time on the side of the road in the early morning light. Some blades of grass seem to frame the bird. Of course, that’s not so easy for the autofocus of the Canon EOS R 5. I had set it to center-weighted AF. But it remains difficult to catch the bird. Because this time it doesn’t stand still for long, but rushes crouched across the path.

After a while the bird stands at the willow thicket on the opposite side. Again, it quickly disappears and then runs across the path to disappear into the tall grass.

I decide not to annoy the bird too much and refrain from further attempts to attract it. Maybe I should come back around noon.

It is said that the Corn Crake is more nocturnal and the sun would be detrimental to its appearance. This Corn Crake must have changed his mind. In any case, I hear it calling out unprovoked when I’m back in the same place 3 hours later.

My camouflage tent, a Stealth Gear Extreme Professional Wildlife Square Hide camouflage tent, is quickly pitched. I use the Cullmann tripod Titan Professional CT200 as a base and attach the ProMediaGear GKJR Katana Pro Aluminum Gimbal Head “wrong” to the center column. So I can use the advantages of a tripod, don’t have to shoulder the weight of the station wagon myself and when I sit down on the floor I still have an amazingly low perspective. This is where the foldable display of the Canon EOS R 5 shows its advantages. In the past, you would have had to use an angle viewfinder. I put the Bluetooth speaker back on the side of the road, right where the tall grass ends, and wait.

The Corn Crake is now even more careful. He comes out of the tall grass still quite reliably. Over time, however, it becomes more and more cautious, does not want to expose himself so much, secures himself and then runs to a willow grove in a safe thicket.

It is important to know when addressing a Corn Crake that the Red-backed Shrike (Lanius collurio), that occurs in the same habitat emits similar calls, although not with the same merciless consistency as the Corn Crake. In addition, the calls are of course not that loud. But at a distance many a Red-backed Shrike has been mistaken for a distant calling Corn Crake.

In the morning I had walked a paved path in the middle of the area from the southern dike in the direction of the river. Willows (Salix sp.) also line the meadows from time to time. Of course, nothing can be seen in the tall grass. Especially in the area in front of the flood protection dike at the mouth of the Warthe there are extensive pastures that have not yet been mowed even now – at the beginning of June. They give shelter and home to the Corn Crake; a perfect habitat for this special bird.

The Ujście Warty National Park is one of the younger large protected areas in Poland. It was founded in 2001 – Access from Central Europe is easy as it is on the western border of the country. Küstrin is only 80 kilometers away from Berlin. The Warthe flows through the area and transforms the area of around 8070 hectares into a water meadow landscape before it reaches the Oder river as an inland delta near Kostrzyn. Natural arms of the river, numerous backwaters and man-made canals create a paradise for flora and fauna. The landscape changes in all seasons. But it is rich in birds in all seasons. The uniqueness of the bird life and the extensive wet areas prompted the park to be included in international protection regulations. Including the Ramsar Convention, the “Convention Concerning Wetlands, Particularly as Habitats for Waterfowl and Shorebirds, of International Importance.