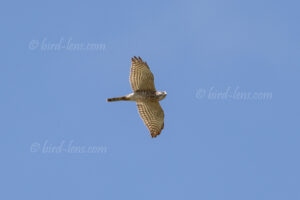 A sunny day above Stari Grad with blue sky and mediterranean midday heat. It’s already pretty hot. Suddenly we see a circling, bright-looking raptor, which can be seen against the blue sky and obviously feels comfortable in the thermals of the mountain cone behind it. My guess, Levant Sparrowhawk, is confirmed when looking through the viewfinder of the Canon R 5. The female-colored Accipiter-Hawk flies its circles again and again. The Levant Sparrowhawk is of course very similar to its relative, the Eurasian Sparrowhawk (Accipiter nisus). Both are about the same size and reach similar wingspans. However, as can be seen in the photo, the Levant Sparrowhawk has lighter colored underwings. The supposedly darker wingtips, which should be easy to see in flight, are not so concise now. What really stands out in contrast to the Eurassion Sparrowhawk is that this is a dark-eyed Accipiter. In addition, females have a dark central gular stripe.

While the underside of the male is light and only faintly banded, the female has a stronger banding pattern. I can’t see a banding on the photos. Although the gular stripe is clearly visible, the stripes on the belly appear more longitudinal than transverse. This might hint for an immature, young bird. Surely it is not from this year but rather a youngster from last year who may have to explore its new territory.

I don’t immediately notice that the gray tail with the light-colored rump is quite a bit shorter than that of the “normal” Sparrowhawk. However, the proportions are different, more falcon-like, with more pointed wings, not entirely dissimilar to those of the Eurasian Kestrel (Falco tinnunculus).

The majority of the records presented in the scientific work on “Conserving Wild Birds of Montenegro – potential SPA Natura 2000” show that the Levant Sparrowhawk mainly inhabits the lowlands of southern Montenegro and thus practically exclusively the Mediterranean biogeographical region with semi-open landscapes with mosaics hedgerows, orchards, small villages, loose woodland and scrubland that are usually close to water and human habitation.

Due to the similarity with Common Sparrowhawks and Eurasian Kestrels, the comparatively shy and withdrawn behavior and the scattered distribution, the total population of 100 – 180 breeding pairs mentioned in the elaboration is probably only a rough estimate for the country of Montenegro, but also one which is at the lower limit.