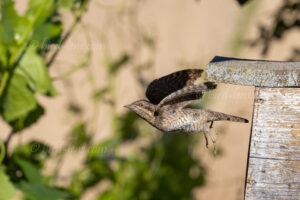 A hike through the vineyards in the Kaiserstuhl in the last south-western corner of Germany. In a wavy, butterfly-like flight, a bird with broad, deeply fingered wings drawn in black and white flies towards an old shed. It is a Eurasian Hoopoe (Upupa epops) that brings a large insect to feed the young. A beautiful picture, the creation of which is described in a separate blog. Looking through binoculars through a hole in a broken slat on the back, a brown-grey bird with a conspicuous black stripe on its head and back can be seen. That’s a Wryneck (Jynx torquilla). The next time it sits on a pole, it has his beak full of dark winged insects, probably meadow ants. The bird probably is on its way to a breeding cave. As it turns out, his nesting hole is in a nest box at the back of the shed, so not readily accessible without causing massive disturbance.

So I put a Canon EF 200mm f/2.0 IS USM lens attached on a Canon EOS 1 DX Mark III on a Gitzo GT3542 XLS Systematic tripod with the FlexShooter Pro Lever Black, use the WFT-E9 (Wireless File Transmitter) and trigger remotely with the laptop via EOS Utility. So I can reduce the distance to the nesting box to 8 meters without irritating or even disturbing the Wryneck through human presence, because the car itself with the triggering photographer is behind a few rows of vines and is therefore harmless to the wryneck. The Canon EOS 1DX Mark III can be controlled remotely with this wireless file transmitter over a range of 150 m at a speed of 5 GHz.

Shortly after setting up the photo equipment, the Wryneck appears with a beak full of ants and clings to the opening of the nesting box. It feeds and has already flown away again. It happens like that a few times. But then it comes flying and slips into the box. After a short time, the bird carefully pushes first his head, then his neck and finally his whole upper body out of the opening. I’m still thinking: it’s about to fly off. So I keep shooting on it with a release speed of about 20 shots / sec. It’s a good thing that you can alternatively use the option of the electronic shutter with this camera. Not only does this allow you to record without shutter noise, but the camera records significantly faster than with the mechanical shutter.

Images at around 1/3,200 seconds still show a slight motion blur, but the result of the flying turnneck is impressive – isn´t it? I had set the aperture to aperture “8” in manual mode. It’s good that I was able to work in sunshine and with higher ASA values ​​to achieve these fast shutter speeds with small apertures.

While the Eurasian Hoopoe, with its conspicuous, black and white feathered crest, is a bit reminiscent of an Indian chief and is easy to recognize from afar due to the black and white wing markings, the lark-sized Wryneck has an inconspicuous, bark-colored plumage. The Hoopoe gets its Latin name from its distinctive call, which sounds like a repeated “hupupup.” The Wryneck, on the other hand, owes its name to its special defensive behavior. Because when threatened, it twists and turns its head and body like a snake and lets out a hissing sound.

But the two endangered bird species also have things in common. Both are dependent on tree cavities or nesting boxes for breeding. The Hoopoe in particular needs large insects, such as are (still?) found in wine-growing regions. The Wryneck, on the other hand, needs meadow ants, which are also particularly common in vineyards.