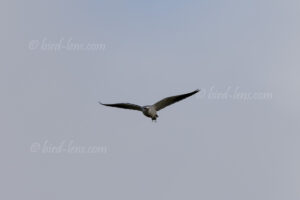 For a birder interested in subtropical birding in the middle of german winter, there is a chance right now. Reports in Ornitho.de notice a Black-winged Kite (Elanus caeruleus) just 150 km or 2 hours drive away from Berlin. The Kite has positioned itself on the Elbe near Dommitzsch north of Torgau. With the great portrait of an adult Black-winged Kite in the approach, which was taken in Ghana, this photo cannot keep up of course. But a Black-winged Kite is a real rarity in Germany; and the sighting on the Elbe near Dommitzsch north of Torgau is the first report for Saxony.

Arriving around noon, the Black-winged Kite was sitting quite openly in a strong oak or lime tree with two distinct, large mistletoe clusters on the outskirts of Mahlitzsch, a village near Dommitzsch. It sat there for a long time until some birders armed with spotting scopes wanted to take a closer look at the tree. The Black-winged Kite stroked off and could be discovered a little later circling above a wide fallow. As on the previous days, it was intensively approached by a pair of Common Kestrels (Falco tinnunculus). The strong wind from the north-west was not conducive to flight.

Only in the evening, when the wind had calmed down, the Black-winged Kite could be observed again in flight, this time hunting over an old sunflower field. Sometime when the sun broke through the thick clouds in the most beautiful evening light, the Black-winged Kite could be photographed landing on an apple tree. He had obviously captured a mouse and crested it on a fruit tree.

Patience is necessary. During the last stop on Saturday I spent a good 5 hours at the site.

In comparison, conditions were perfect in Ghana in November 2019. Taken in the beautiful light of the early African morning, the red eye of the adult Black-winged Kite stands out. The picture taken is very beautiful, perfectly composed in the very nice light. Despite the speed of the flight, the Black-winged Kite is sharply photographed and the exposure is affected just right. The red eyes stand out against the white face and are highlighted by the dark, almost black eyebrows. Otherwise, the identifying features of this beautiful bird are also easy to see. The light gray wings, jet black shoulders and otherwise crisp white rump.