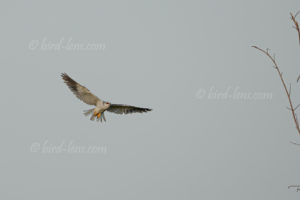 A great image of an adult Black-shouldered Kite (Elanus caeruleus) on the approach, which was photographed near the coast in the Central Region of Ghana, should be mentioned today.

Taken in the perfect light of the early African morning, the red eye of the adult particularly stands out. This is a beautiful picture, perfectly composed in very beautiful light. Despite the speed of flight, the bird is in sharp focus and the exposure just right with details preserved throughout the image. When approaching a dead tree as a perch it is very nice to see the somewhat owl-like face of this species. The red eyes, which stand out from the white face are highlighted by the dark, almost black eyebrows. The distinguishing features of this beautiful bird are also easy to recognize in other ways. The light gray wings, the deep black shoulders and the otherwise crisp white rump and belly.

Occasionally this bird, which is native south from southern Europe down to Africa, also migrates as a vagrant to Central European regions. In June 2016, for example, a summer bird that had shot over its target breeding area was observed in north-eastern Brandenburg. The area with the location of the Gleitaar was in the Randowbruch. Here the bird mainly hovered over the fields and damp meadows. The wet meadowland near the border to Poland is also good for surprises and has already revealed some rarities as an Imperial Eagle (Aquila heliaca) already in the 2nd year.

The beautiful flight image was taken with a Canon 600 mm lens near Elmina in the coastal savannah of Ghana and photographed at 1/500 sec. at an aperture of 5.0 at ISO 100 with a Canon EOS 5D Mark III.

In order to be able to satisfy the growing demand for top shots of the rarer species of the Palearctic, bird-lens.com has made targeted trips to the most beautiful natural landscapes of Brandenburg or Berlin, but also to distant places. This was done to be able to take excellent photos of the birds of the Western Palearctic. The yield of pictures of rare Western Palearctic birds is very good. The nice picture you see in the blog is only a first impression, what you will find very soon behind the “Picture Shop” tab. Just let bird-lens.com know if you need a picture of a bird species before new pictures are online.