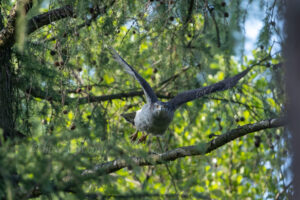 High, shrill, loud calls resound through the morning pine forest in the east of the North German Plain. Suddenly a grey bird with a white underside can be seen elegantly flying between the pine trees, some of which are standing close together. It is the female of the Northern Goshawk (Accipiter gentilis) flying in through the pine forest. After a round she comes flying and sits down near the nest on a branch of a Larch tree (Larix decidua), beautifully framed by the lush green of the Birch leaves. The mother Northern Goshawk herself had not called. When the calls swell again, the bird of prey, previously sitting lengthwise on the branch, turns around and presents itself frontally, showing its beautiful pattern on its breast. A certain nervousness is noticeable. Perhaps as a jumping action, first the right, then the left claw is scratched on the beak. A small white feather slowly sinks to the ground. Suddenly the Northern Goshawk ducks, its wings twitch. Only seconds before a bird, which was sitting plumply on the branch with its head tucked in, you can practically feel the tension now. When the female Goshawk then takes off in a powerful swing, the grey rather inconspicuous raptor becomes the mighty powerpack that is rightly the terror of chickens and rabbits.

Like all parents, hawks know no quarter in defending their young and protecting the nest. The period between leaving the nest and gaining complete independence is a very dangerous phase of life for young Northern Goshawks. The parents are often out looking for food. During this time, the young Goshawks hop around more or less unprotected. There it can come also times to a crash down tot he ground. Then they are unprotected against fox and marten. 2 young Goshawks were to be seen at that incident. One Goshawk – probably the older one – was already standing upright on a branch clearly away from the nest, the other young Goshawk was looking attentively with raised head out of the nest.  Both behaved very calmly and practically motionless.

The mother sits normally somewhere in the proximity and lets the youngs in and at the nest grant. Even though Berlin is known as a goshawk stronghold in Germany, Goshawks can also be found in the wide landscape of southern Brandenburg. However, while quite a few observations of breeding pairs are reported from Berlin’s urban districts in spring, reports of Northern Goshawks in Brandenburg are much more sparse. There is almost no evidence of breeding. This could be due to the fact that one would like to keep the Goshawk from the grasp of pigeon protectors and perhaps also hunters and therefore does not notice appropriate location data. I also came across a pair ready to breed this year near my hometown by tracking their calls in spring. Not far from the place, where 3 young goshawks with mother could be sighted over several weeks in the previous year.

In order to satisfy the growing demand for top shots of the rarer species of the Palearctic, bird-lens.com has made targeted trips to the most beautiful natural landscapes of Brandenburg or Berlin but also to distant places. All this in order to be able to take excellent photos of the birds of the Western Palearctic. The yield of pictures also of rare Western Palearctic birds is very good. The nice picture you see in the blog is just a first impression, what you will find in behind the tab “Picture Shop” very soon. Just let bird-lens.com know if you need the picture of a bird species before new pictures are online.