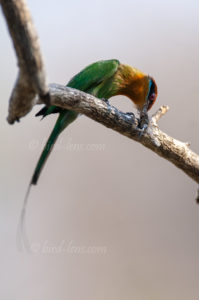 The heat is still breathtaking. But now for the afternoon trip in Lengwe National Park. After all, it’s already near 3:00 p.m.. The trail leads me over the Main Drive to the Main Hide. Hats off, walking from the parking lot is annoying – especially in the cops heat. But the hide itself is somewhat stable, gives an excellent overview of a remarkable water hole in this otherwise super-dry thorny savannah. The hide is situated on stilts, anchored between 2 trees. It allows good views to the sides, which are even suitable for photographers, as the slits are just wide or high enough. I only remove the lens hood, which I don’t need here anyway, since the hide’s windows are already suitable as sun visors. Fortunately, there is a light breeze at the waterhole, which occasionally provides relief from the monkey-like heat. The first thing I do is pick up Boehm’s Bee-eater (Merops boehmi) on a branch next to the hide. At first this bird – endemic to Mopane forests – sits on a branch nearby. Then it flies off in typical bee-eater-style and comes back on the same branch with a long dragonfly. The fat dragonfly is processed immediately. I can take great pictures of this long-tailed bird on the branch as it handles the captured dragonfly in its beak. After all, it lies “beak” -just and is carried with a swing into the throat.

Boehm’s Bee-eater is considered to be one of the “more difficult” Bee-eaters. This has nothing to do with the fact that it is rare, but because its range is limited to less visited parts of the African continent. The species occurs particularly in southern Tanzania, Malawi and northeastern Zambia. It is a very beautiful type of wet and dry mopane forest and can be found quite easily in Liwonde National Park or in Lengwe National Park in Malawi.

Lengwe National Park is a national park in Malawi near the city of Chikwawa and about 60 km southwest of Blantyre, the old capital of Malawi. Lengwe’s topography is unusual for Malawi and consists of open deciduous forests and dense thorn thickets. The park is known as the home of the shy Nyala antelope, which is also called Lowland Nyala (Tragelaphus angasii). Lengwe’s climate is hot and dry and the only source of consistent water is rain. Some artificial water holes have been built to attract thirsty animals and make them visible to visitors.

Lengwe was originally established as a game reserve to protect the large mammals in the Lower Shire Valley. The park now has a total size of 887 square kilometers. Lengwe was expanded to this size mainly to protect the catchment areas of the Shire, Mwanza and Nkombedzi wa Fodya rivers.

The wonderful family of Meropidae includes at least 26 beautiful species, of which Africa can boast no fewer than 20 species. Bee-eaters can also be found all over Asia and even as far as Australia. These charismatic, colorful, and elegant birds are popular with bird watchers from experts to beginners and belong to a group of birds whose beauty even non-bird watchers can truly appreciate.

A selection of the most beautiful Bee-Eater-pictures that bird-lens.com took on its trips to the tropics is presented in the “Bee-Eaters of the Word” gallery. In Africa, bee-eater occurs from the southern tip of the continent to the desert-dominated north and occupies an incredible variety of habitats and niches. These range from the interior of the deepest rainforests in the Congo to the dry steppes of the Sahel zone. Both indigenous and migrating or wintering species occur in tropical areas. One advantage of these beautiful birds is that not only are they colorful and energetic, but they’re also relatively easy to spot. At least that is true if you make several visits to Africa and are ready to be in the right place at the right time. For some species, such as the Rosy Bee-eater (Merops malimbicus), the Black-headed Bee-eater (Merops breweri) or Blue-headed or its cleavage Blue-moustached Bee-eater (Merops muelleri) the journey to the destination should prove to be the greatest challenge.