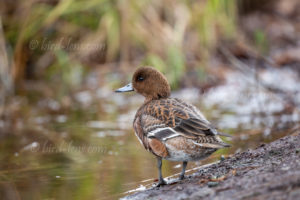 Only small areas of water right on the edge of the reed have remained open. It’s been cold for days, temperatures are around freezing point. Now a strong north wind has taken over. A small town pond not only popular with children and seniors as you can see from the beer bottles lying on the ice, is almost frozen in the gloomy winter light. When I have almost completed the lap around the pond, an inconspicuous duck is standing on the ice. The compact shape, a white belly and the bluish beak with the black tip are striking. It is a Eurasian Wigeon (Mareca penelope) or (Anas penelope). She is undecided as to whether she should stand next to the two Mallards (Anas platyrhynchos) on the ice, seek cover in the reeds with the Common Moorhens (Gallinula chloropus), or fly away. Eventually the bird decides to stay. Another Eurasian Wigeon comes in and lands sliding on the ice.

The couple had surely changed into the simple dress in the summer. The male wigeon is particularly noticeable. It has a rust-brown head with a light yellow parting. The head feathers can shimmer slightly green depending on the lighting situation. The chest is colored light pink while the coat and flanks have a fine gray pattern. The female’s plumage is much less conspicuous and resembles the plain dress that both birds wore. Both, male and female, have a bluish-light gray beak with a black nail tip all year round.

It is said that Eurasian Wigeons run swiftly and with no noticeable waddling. Well, that was only possible with restrictions on the ice. In any case, it was clear from the movement that the surface was smooth.

Together with Mallards, I had already seen this pair of Eurasian Wigeon on the pond several times in winter. Due to the icing, however, the freedom of movement was now restricted and the Wigeons could be photographed much better – and closer. In addition, the visitor traffic, which would otherwise exert particular pressure on the birds at the pond, was restricted by the uncomfortably cool winter wind.

Large numbers of Eurasian Wigeons can also be seen in Central Europe on their migration and in winter. It prefers shallow waters during migration and can then also be observed in flooded lowlands. In winter it can also be found on rather shallow banks and in fields near irrigation channels or larger bodies of water. Up to now I was not aware that the wigeon is supposed to be a park bird. Of course, it cannot be ruled out that it is a question of escaped birds that do not behave appropriately and perhaps even seek proximity to humans.

The call of the male Eurasian Wigeon, which is an unmistakable melodious whistle, such as “wiwü” or “huihu”, could not be heard at all.

Even if the Eurasian Wigeon is not a park bird, the winter population in Central Europe is considerable. The number has been rising steadily since the 1980s. One of the reasons for this could be the emergence of new food sources.

Eurasian Wigeons mainly breed in waters in the boreal coniferous forest zone. In Europe, the Eurasian Wigeon is a regular breeding bird in Iceland, Scotland, northern England, Norway, northern and central Sweden and large parts of Finland. It also breeds irregularly in Wales and the east of England. Individual breeding from the Netherlands, northern Germany and Poland have been reported. In its main breeding areas it breeds on lakes and ponds rich in vegetation and, to a lesser extent, on slow-flowing rivers of the taiga.

Eurasian Wigeon are – like many other waterfowl – rather shy birds. To photograph the Wigeon regularly you need patience and in many cases a camouflage like a camouflage tent. So it’s worth exploring the (supposed to) less productive corners of a city. Perhaps there is a (inconspicuous) winter guest there which has fled the cold. Otherwise, the duck is a rather difficult species for bird photography.