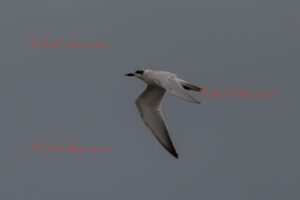 On the wide sandy beach I have been photographing dozens of Little Gulls (Hydrocoloeus minutus) for a while against the vast, overwhelmingly expansive sea and a distant dark gray horizon. Then there is also a species of terns. First I have problems with the identification. The beak seems so short and partly curved that I don’t even think of Sandwich Terns (Thalasseus sandvicensis), which are the most likely to be expected here at this time of the year. But the first specimen actually had its lower beak broken off over a remarkable length. The upper beak is considerably longer. Then it is not Sandwich Terns in non-breeding pluamge, but a single specimen of the Gull-billed Tern (Gelochelidon nilotica). I then photograph Little Gulls again and again, which can be admired in all their plumages, some in heavy moult. Some looking pretty ragged. Here, too, there are at least 2 individuals whose lower beak is broken off. Surely that’s not a bad habit here? A little later I actually see Sandwich Terns in non-breeding plumage as well. They stand – defying the wind – together with Black-headed Gulls (Larus ridibundus) on the gently washed beach. The beak of Sandwich Terns looks very different. Some even have the yellow tip. There are also individuals of this species whose lower beak has broken off.

Beak injuries are not uncommon with birds due to collision accidents (e.g. on window panes) or fights with conspecifics. The effects are different. Splits, cracks or fractures may occur. The latter can lead to the complete breaking off of the upper or lower beak. Beak injuries can be very painful for the affected birds. Because the beak is not just a “dead appendage” of the body. A bone is hidden under the visible part, the beaked horn. The bone is encased in active tissue, which is effectively the growth zone of the beak horn. Layer by layer of the beak horn pushes from the inside outwards. This means that the beak grows back in healthy birds throughout their lives. We know something like this from our fingernails. This regrowth of the beak is possible because the growth zone is heavily supplied with blood. Oxygen and the necessary minerals are transported in the blood to the cells that are responsible for the growth of the beak. If the bone and growth zone is damaged by a fracture or other deep injury, it can be life-threatening for the affected bird.