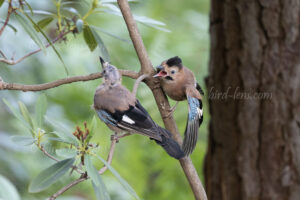 The view of the blue sea through the pines and chestnut trees is really impressive. Well-known calls reveal that Eurasian Jays (Garrulus glandarius) initially roam around the hotel invisibly. Then I see them too. They are 2 birds of the same species. One looks amazingly disheveled, the other is obviously a hatchling that wants to be fed. At first only a brown bird with an almost bald, gray head can be seen. A black bundle of feathers sticks out cheekily above the beak. The Eurasian Jay really does look like it has met father death. Maybe it is infested with fleas, or it has been infected with the tropical Usutu virus, or it just in moult. Should he be stricken by an illness, one can only advise the boy, who is begging loudly, to set up his own business before he catches the infection. But that’s how it is for the adult bird with a wide open beak and slightly hanging, spread wings with intensive calls.

In 2018, the tropical Usutu virus led, among other things, to a heavy death toll for Eurasian Blackbird (Turdus merula) in Germany. This virus, which is particularly dangerous for Eurasian Blackbirds, was spreading in Germany at that time. The Usutu virus made the birds apathetic, they seemed bloated and lost feathers in the head area. Affected birds obviously seemed ill, no longer fled and usually died within a few days. The pathogen caused bird deaths for the first time in 2011 according to official information; the warmer regions of Germany were particularly affected.

A Black Sea holiday in Turkey was mainly dedicated to bird migration along the Black Sea coast. The ruderal areas of the immediate coastal area actually attracted migrating songbirds in particular. This mainly applies to the few remaining areas of the coast section, which is otherwise completely built up by traffic and settlement. But the native birds were also interesting, not least because they are often different regional subspecies than in Germany; there is even a subspecies “Garrulus glandarius ferdinandi”. In this case it is even a question of another jay subspecies, the atricapillus group. Garrulus glandarius anatoliae has a distribution ranging from Turkey to northern Iran. As a summary of identification it may be said that these birds being darker than the superspecies of this subspecies group (G. g. atricapillus), with a white of the face and forehead tinted more reddish.

It is therefore highly recommended to visit as an ornithologist the few natural places on the densely populated and densely built-up Turkish Black Sea coast. The Black Sea coast of Turkey is better known for the migration of birds of prey. But the songbird migration is really worthwhile here in Eastern Anatolia, too.